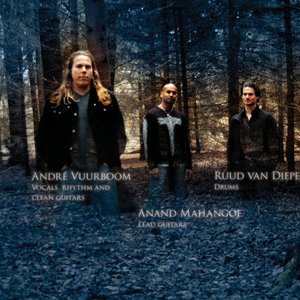 The story so far…

André soon began writing material. Demos were sent to the other band members on a regular basis, with Kees visiting on a number of occasions to add bass tracks. At this point the band was still without a rhythm guitarist for the album. A suitable candidate was soon found in former Imperium guitarist Rob Cerrone.

In February 2005 Sphere of Souls began rehearsing as a four-piece (minus Anand Mahangoe and Joost van den Broek). However, it soon became apparent that Patrick Gerritzen was not going to be able to combine his other commitments with the band. In late March 2005 he was replaced by Kees's former bandmate, ex-Autumn Equinox drummer Ruud van Diepen.

Sphere of Souls' debut album 'From the Ashes…' was recorded between May and September of 2005 at Rotterdam's Excess Studios and the home studios of Joost van den Broek and Anand Mahangoe.

In October 2005 Anand Mahangoe, who had contributed solos to 'From the Ashes…', became a permanent member of Sphere of Souls.

In November 2005 Sphere of Souls signed to the Finnish progressive rock and metal label Lion Music, which released 'From the Ashes…' on Friday, 21 April 2006.

Prior to the album's release, Sphere of Souls made their live debut opening for Ulysses on 1 April 2006. This was followed by a prestigious support slot with Vanden Plas on 2 April. Visit the 'Concerts' section under 'News' for more details regarding forthcoming gigs.

The official release party for 'From the Ashes…'
was held at Plato in Helmond, the Netherlands,
on Friday, 12 May 2006. Joost van den Broek, who does not usually perform live with Sphere of Souls, also joined the band on stage for the performance.

Since the From the Ashes…' release party Sphere of Souls have performed with Stream of Passion. On 1 October 2006 they will open the final day of ProgPower Europe 2006.