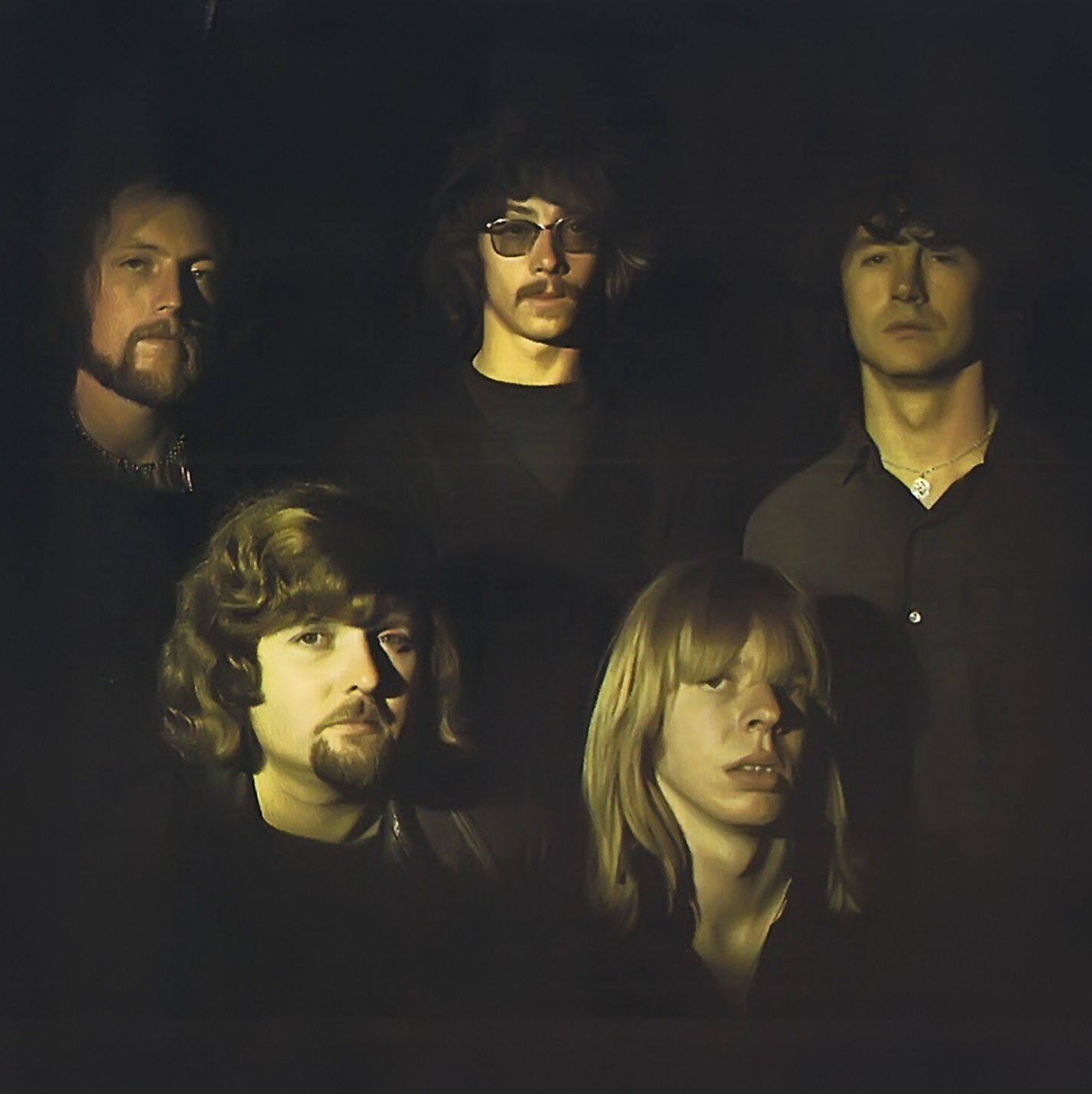 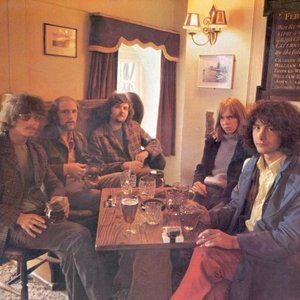 Strawbs are an English rock band founded in 1964. Led throughout by talented musician Dave Cousins, they are best-known for their folk-rock and progressive rock albums of the 1970s and for including Sandy Denny as an early member of the band (before she joined Fairport Convention) and Rick Wakeman for two albums (before he moved on to Yes).

Although they started out in the sixties as a bluegrass band, the Strawberry Hill Boys' repertoire soon shifted to favour their own (mainly Cousins') material. They were the first UK signing to Herb Alpert's A&M Records and recorded their first single "Oh How She Changed" b/w "Or Am I Dreaming" in 1968, which was produced and arranged by two highly influential seventies’ producers, Gus Dudgeon and Tony Visconti, who also worked on their critically acclaimed first album, Strawbs, which was released in 1969. (Note: Although that first single was issued in the U.S. on A&M, neither of their first two A&M LP's were issued in the US until around 1975.)

After the folk-tinged Dragonfly, Cousins and Hooper added Rick Wakeman on keyboards and Richard Hudson and John Ford on drums and bass respectively. The new lineup had their London debut at the Queen Elizabeth Hall, where Wakeman was trumpeted as “Tomorrow’s Superstar” by Melody Maker. Their third album, Just a Collection of Antiques and Curios, the first to have a US release, was taken from that concert. Wakeman stayed with them for one further album, From the Witchwood, then departed to join Yes, being replaced by Blue Weaver who had previously been with Amen Corner and Fairweather. This lineup produced what many feel to be the archetypal Strawbs album Grave New World, before yet another change, the departure of founding member Hooper, who was replaced by rocker Dave Lambert, formerly of Fire and the King Earl Boogie Band.

Lambert’s arrival in 1972 coincided with a move towards a harder rock style, also evidenced by Cousins’ solo album recorded that summer, with guests such as Roger Glover from Deep Purple and Jon Hiseman from Colosseum. The first single with Lambert on board, "Lay Down", hit the UK charts at number 12, followed by a single from the album penned by Ford and Hudson, "Part of the Union", which went up to number 2. The album Bursting at the Seams also reached number 2 in the album charts and the band undertook a 52-date UK tour to packed houses.

However, during the course of a US tour, tensions came to a head and the Bursting At The Seams band did just that, with Hudson and Ford splitting off to record their own material, firstly as Hudson Ford, later as The Monks and High Society. Weaver also left the band, eventually finding a comfortable (and highly lucrative) gig with the Bee Gees; he also played with Mott the Hoople.

Cousins and Lambert rebuilt the band, adding John Hawken (formerly of The Nashville Teens and Renaissance) on keyboards, Rod Coombes formerly with Stealers Wheel and Chas Cronk on bass. This line-up recorded Hero and Heroine and Ghosts, and tended to concentrate on the North American market with relatively little touring in the UK. Strawbs still retain a great fan-base today in the US and Canada. Hero And Heroine went platinum in Canada, and both albums sold extremely well in the US too. A further album, Nomadness, recorded without Hawken, was less successful, and was their last for A&M Records.

Signed to the Deep Purple-owned Oyster label, they recorded two more albums with two keyboardists replacing Hawken – Robert Kirby, also known for his string arrangements (notably Nick Drake) and John Mealing of jazz-rock group If. Coombes was replaced by Tony Fernandez for a further album Deadlines, this time on the Arista label.

Though recording was complete on a further album Heartbreak Hill, featuring Andy Richards on keyboards, Cousins’ decision in 1980 to leave the band to work in radio effectively signalled the band’s demise, and the album remained in the vaults for many years.

A reunion on Rick Wakeman’s TV show Gas Tank in 1983 resulted in an invitation to reform to headline 1983’s Cambridge Folk Festival. The Grave New World line-up plus Brian Willoughby (who had replaced Lambert when he left in 1978 during the making of Heartbreak Hill, and had also begun a partnership with Dave Cousins as an acoustic duo from 1979 onwards) went on from there to perform occasionally in the UK, US and Europe over the next few years, replacing Weaver with Chris Parren from the Hudson Ford band and Ford himself (when he relocated to the US) with bass player Rod Demick.

1993 saw the band touring in the UK for their 25th anniversary, but the next few years proved rather quiet. Until 1998, that is, when Cousins staged a 30th anniversary bash in the grounds of Chiswick Park in London, which saw several different line-ups of the band perform on a bright summer’s day in the open air. The final line-up of the night – the Bursting at the Seams line-up plus Willoughby – became the ongoing version of the band, with annual tours in 1999, 2000 and 2001.

An injury to Cousins’ wrist coinciding with a Cousins & Willoughby commitment brought Dave Lambert in to work with Cousins & Willoughby, which soon became Acoustic Strawbs, recording an album Baroque & Roll in 2001. That trio began to tour on a regular basis - first in the UK, then the US and Canada, and on into Europe. The three guitars of Acoustic Strawbs effortlessly reproducing much of the majesty and depth of the “big” Strawbs keyboard-laden instrumentation. Willoughby was replaced by Chas Cronk when Willoughby left in 2004 to spend more time working with his partner Cathryn Craig. Chas has brought bass and bass pedals, which further add to the depth of the Acoustic Strawbs sound.

2004 also saw the return of the Hero And Heroine line-up of the electric band, touring in tandem with the acoustic line-up, and recording their first new album for 25 years, Deja Fou, on the Strawbs own record label Witchwood Records.

Spin off bands
In 1973, Hudson and Ford then quit to form Hudson Ford, with the line-up of Chris Parren (keyboards), Mickey Keen (guitar and sound engineer), and Ken Laws (drums). They produced four albums, three for A&M - Nickeloedon, Free Spirit, Worlds Collide - and a fourth for CBS - Daylight. They also had hit singles with "Pick Up The Pieces" and "Burn Baby Burn", and toured extensively in the UK, US and Canada.

Switching genres in the late 70s, Hudson, Ford and Terry Cassidy combined together with Clive Pearce on drums (Hudson was then playing guitar, having switched from drums) to produce punk flavoured 1979 album Bad Habits as The Monks (not to be confused with the 1960s garage/beat group of the same name). The album spawned a number 19 hit in the UK singles chart — Nice Legs, Shame About The Face — which featured a mildly risquė cover. They dabbled with 1930s style music in 1980 as 'High Society' before returning to the pseudo-punk format of The Monks for a follow-up album released in Canada only, Suspended Animation, with the addition of Brian Willoughby on guitar and Chris Parren on keyboards.

While the album failed to produce further UK chart success, the band were huge in Canada particularly, playing stadium gigs; Suspended Animation went platinum in Canada too. The CD re-release of Suspended Animation includes six bonus tracks, recorded for a third album but never before released, by Hudson, Ford and Cassidy — Huw Gower guests on one track on lead guitar.

All details of Strawbs' activity and that of ex-members can be found at the official website.

A link can also be found to the Yahoo Strawbs-related discussion group called "Witchwood", together with links to "Witchwood Records" where the band's products and related merchandise such as band members' solo projects can be purchased.

Recently
Since 2007 Strawbs have been recording and touring in two formats: the acoustic format comprising Cousins, Lambert and Cronk and also as the entirely original Hero and Heroine/Ghosts line-up of the electric band from 1974 - Cousins, Lambert, Cronk, Coombes and Hawken. The line-up undertook two tours in 2006. Release of a live DVD recorded at the Robin 2, Bilston in March 2006 is hoped for before too long (delays owing to licensing difficulties). For that particular recording, and other concerts on the same tour, vocalist and bass player John Ford (member of an earlier Strawbs line-up) flew over from New York to perform with members of the Hero and Heroine line-up. The Hero and Heroine line-up toured again in 2007 in the UK, including gigs at the Robin 2, Bilston, The Stables, Wavendon, and several locations in Southern and South-Western England. This line-up also toured the UK and US in May-June 2008. Following the end of the US Tour, John Hawken announced his intention to leave the group. The remaining four members (the Nomadness line up) continued as the core of the electric band. In January 2009, it was announced that Oliver Wakeman, son of Rick Wakeman, would be playing keyboards with the band on tours of Canada, the UK and Italy.

In autumn 2006 Strawbs released a long-awaited 4-disc boxed set called A Taste of Strawbs which has been well-received - several reviews can be read at Strawbs website (http://www.strawbsweb.co.uk/). The Hero and Heroine/Ghosts line-up recorded a new studio album, The Broken Hearted Bride, released in September 2008.

In 2007, as a three-piece acoustic format they played various gigs in Europe during the Spring, then the five-piece Hero and Heroine line-up got together once again to play several concerts in North America in late June/early July, including two appearances at the Stan Rogers Festival in Nova Scotia. As well as Strawbs, Dave Cousins put together a new set of musicians (Miller Anderson - guitar, Chas Cronk - bass, Ian Cutler - fiddle, Chris Hunt - drums) - initially for a one-off show in Deal - known as the Blue Angel Orchestra, who subsequently played at Strawbs' now-annual Christmas Party in 2006 and 2007.

Dave Cousins also found time to record a new solo album The Boy in the Sailor Suit with The Blue Angel Orchestra. In 2008, Dave Cousins released his third solo album, Secret Paths, with steel guitarist Melvin Duffy. Along with the album, Cousins toured the US in Spring 2008, (joined by Ian Cutler for the early part of the tour), a concert album from this tour, entitled Duochrome, was released in September 2008.

The latest incarnation of the band with Oliver Wakeman on keys released a studio album Dancing to the Devil's Beat in late 2009.

The Strawbs' website has announced that neither Rod Coombes nor Oliver Wakeman are available for the upcoming October/November 2010 tours of Canada and the UK. (Coombes has educational commitments, and Wakeman is committed to recording a new Yes album) For these tours: Tony Fernandez (who played with Strawbs on Deadlines and Heartbreak Hill) will be on drums; and John Young will be on keyboards. As of 16 August 2010, it has not been announced whether these changes are just for these tours, or whether this represents a new permanent line-up for the band.