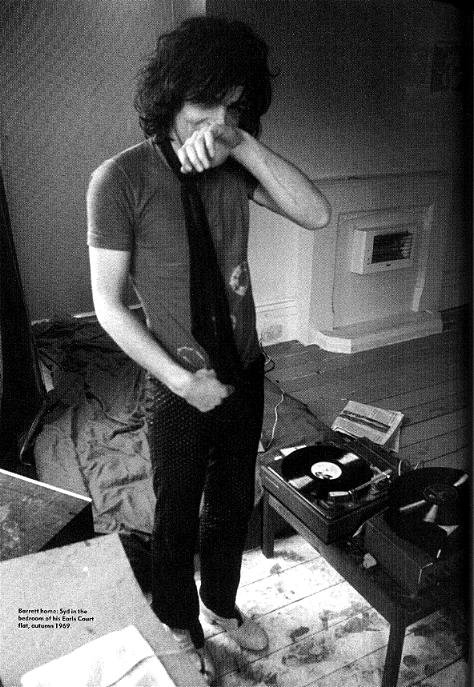 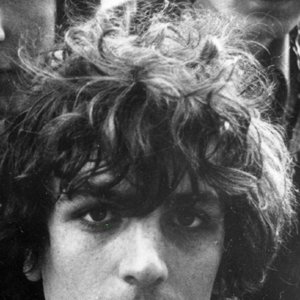 Roger Keith "Syd" Barrett (born 6 January 1946 in Cambridge, England; died 7 July 2006 in Cambridge, England) was an English musician, singer, songwriter, guitarist, and painter, best remembered as a founder member of the legendary rock band Pink Floyd. He was the lead vocalist, guitarist, and primary songwriter during the band's psychedelic years, providing major musical and stylistic direction in their early work; he is also credited with naming the band. Barrett left the group in April 1968 amid speculations of mental illness exacerbated by drug use.

Barrett's innovative guitar work and exploration of experimental techniques such as using dissonance, distortion, and feedback had an enormous legacy, with a wide variety of musicians from David Bowie to Brian Eno to Jimmy Page and more drawing influence. In his post-musician life, Barrett continued with his painting and dedicated himself to gardening, never to return to the public eye. A number of biographies have been written since the 1980s, and Pink Floyd wrote and recorded several tributes to him after he left, most notably the 1975 track "Shine On You Crazy Diamond".

Barrett acquired the nickname "Syd" at the age of fifteen, a reference to an old local Cambridge drummer, Sid Barrett. Syd changed the spelling in order to differentiate himself from his namesake. Starting in 1964, the band that would become Pink Floyd underwent various line-up and name changes such as "The Abdabs", "The Screaming Abdabs", "Sigma 6", and "The Meggadeaths". In 1965, Barrett joined them as The Tea Set (sometimes spelled T-Set), and when they found themselves playing a concert with a band of the same name, Barrett came up with the name "The Pink Floyd Sound" (also known as "The Pink Floyd Blues Band", later "The Pink Floyd"), possibly after two obscure bluesmen, Pink Anderson and Floyd Council. While the band began by playing cover versions of American R&B songs (much in the same vein as contemporaries The Rolling Stones, The Yardbirds, and The Kinks), they carved out their own style of improvised rock and roll by 1966, which drew as much from improvised jazz as it did from British pop-rock, such as that championed by The Beatles. In that year, a new rock concert venue, the UFO, opened in London and quickly became a haven for British psychedelic music. Pink Floyd became their most popular attraction, and, after making appearances at the rival Roundhouse, became the most popular musical group of the so-called London Underground psychedelic music scene.

By the end of 1966, Pink Floyd had gained a reliable management team in Andrew King and Peter Jenner. The duo soon befriended American expatriate Joe Boyd, who was actively making a name for himself as one of the more important entrepreneurs on the British music scene. Boyd produced a recording session for the group in January 1967 at Sound Techniques in Chelsea, which resulted in a demo of the single "Arnold Layne". King and Jenner took the song to the recording behemoth EMI, who were impressed enough to offer the band a contract, under which they would be allowed to record an album. The band accepted. By the time the album was released, "Arnold Layne" had reached number twenty-one on the British singles charts (despite a ban by the BBC) and a follow-up single, "See Emily Play" had sold even better, reaching number six.

These first two singles, as well as a third ("Apples and Oranges"), were written by Barrett. Barrett wrote most of the Floyd's early material, and was the principal visionary/author of their critically acclaimed 1967 debut album, The Piper at the Gates of Dawn. Of the eleven songs on Piper, Barrett wrote eight and co-wrote another two. He was also an innovative guitarist, exploring the musical and sonic possibilities of dissonance, distortion, feedback, and the echo machine; his experimentation was partly inspired by free improvisation guitarist Keith Rowe. One of Barrett's trademarks was playing his Fender Esquire guitar by sliding a Zippo lighter up and down the fret-board through an old echo box to create the mysterious, otherworldly sounds that became associated with the group.

The Piper at the Gates of Dawn was recorded intermittently between January and July 1967. When it was released in August of that year, it became a smash hit in the UK, reaching number six on the British album charts (the album was not nearly so successful in the USA). However, as the band began to attract a large fanbase, the pressures placed on Barrett contributed to him experiencing increasing psychiatric illness.

Barrett's behaviour became increasingly unpredictable, partly as a consequence of frequent experimentation with psychedelic drugs such as LSD. Many report seeing him on stage with the group, strumming on one chord through the entire concert, or not playing at all. At a show in San Francisco, during a performance of "Interstellar Overdrive", Barrett slowly untuned his guitar. Audiences seemed to enjoy such antics, unaware of the rest of the band's consternation. Following a disastrous abridged tour of the United States, David Gilmour (a school friend of Barrett's) was asked to join the band as a second guitarist in order to cover for Barrett, whose erratic behaviour prevented him from performing. For a handful of shows Gilmour played and sang while Barrett wandered around on stage, occasionally deigning to join in playing. The other band members soon tired of Barrett's antics, and in January 1968, on the way to a show at Southampton University, they elected not to pick Barrett up. They attempted to retain him in the group as a songwriter, but this proved unfeasible.

Barrett did not contribute any material to the band after A Saucerful of Secrets was released in 1968. Of the songs he recorded with Pink Floyd after Piper, only one ("Jugband Blues") made it to the band's second album; one became a less-than-successful single ("Apples and Oranges") and two others were never officially released ("Scream Thy Last Scream" and "Vegetable Man"). In March 1968 it was officially announced that he was no longer a member of Pink Floyd.

Solo years (1968-1972)
After leaving Pink Floyd, Barrett distanced himself from the public eye. However, at the behest of EMI and Harvest Records, he did have a brief solo career, releasing two mercurial solo albums, The Madcap Laughs and Barrett. Much controversy has risen around the production work - which left Barrett's more vulnerable moments on tape to give the records a more "authentic" feel - but many feel the treatment did Barrett few favours and instead took advantage of his fragile condition. Much of the material on both albums dates from Barrett's most productive period of songwriting and it is believed that he wrote few new songs after he left Pink Floyd.

The first album, The Madcap Laughs, was recorded in two distinct sessions: a few tentative sessions took place between May and June 1968 (produced first by Peter Jenner and then by Malcolm Jones), while the bulk of the album was recorded between April and July 1969 (produced by David Gilmour and Roger Waters). This album offers an insight into Barrett's state of mind at the time; tracks such as "Dark Globe", have been seen as first-person narratives of schizophrenia. A few tracks on the album feature overdubs by members of the band Soft Machine.

The second album, Barrett, was recorded more sporadically than the first, with sessions taking place between February and July 1970. This effort sounds more polished than the first, but Barrett was arguably in a worse state. This one was produced by David Gilmour and featured Gilmour on bass guitar, Rick Wright on keyboard and Humble Pie drummer Jerry Shirley.

Despite the numerous recording dates for his two solo albums, Barrett did very little musically outside the studio between 1968 and 1972. On 24th February 1970 he appeared on John Peel's BBC radio programme Top Gear playing five songs, only one of which had been previously released. Three were re-recorded for the Barrett album, while the song Two of a Kind was a one-off performance. (The song appears on the 2001 greatest hits album The Best of Syd Barrett: Wouldn't You Miss Me?) Barrett was accompanied on this session by David Gilmour and Jerry Shirley who played bass and percussion, respectively.

Gilmour and Shirley also backed Barrett for his one and only live concert during this period. The gig took place on 6th June 1970 at the Olympia Exhibition Hall, London, and was part of a "Music and Fashion Festival". The trio performed four songs, playing for less than half an hour, and due to poor mixing, the vocals were inaudible until part-way through the last number. At the end of the fourth song, Barrett unexpectedly but politely put down his guitar and walked off the stage.

Barrett made one last appearance on BBC Radio, recording three songs at their studios on 16th February 1971. All three came from the Barrett album, and were presumably aired to encourage people to buy the record. At this stage, though, Barrett seemed to have little interest in recording music, and even less interest in performing it live. After this session, he took a break from his music career that lasted more than a year.

Later years (1972-2006)
In 1972, Barrett formed a short-lived band called Stars with ex-Pink Fairies member Twink on drums and Jack Monck on bass. Though the band was initially well-received, one of their gigs at the Corn Exchange in Cambridge proved to be disastrous and Barrett decided to leave soon afterwards.

In 1974, Peter Jenner convinced Barrett to return to Abbey Road Studios in hope of recording another album. However, little became of the sessions, which lasted three days and consisted of blues rhythm tracks with tentative and disjointed guitar overdubs (the only titled track is the intriguing "If You Go, Don't Be Slow"). Once again, Barrett withdrew from the music industry. He sold the rights to his solo albums back to the record label, moved into a London hotel and when the money ran out he walked back to Cambridge to live in his mother's basement. Further attempts to bring him back (including one endeavour by The Damned who wanted him to produce their debut album) were all fruitless. Barrett still received royalties from his work with Pink Floyd from each compilation and some of the live albums and singles that have featured his songs; Gilmour had commented that he "makes sure the money gets to him alright".

Barrett had one noted reunion with Pink Floyd in 1975 during the recording sessions for Wish You Were Here. Barrett attended the Abbey Road session unannounced and watched the band record Shine On You Crazy Diamond - coincidentally, a song about him.

In 1988, EMI Records released an album of Barrett's studio outtakes and previously unreleased material recorded from 1968 to 1970 under the title Opel. In 1993 it issued another release, Crazy Diamond, a box set of all three albums, each loaded with further out-takes from his solo sessions that illustrated vividly Barrett's inability or refusal to play a song the same way twice.

On 7th July 2006, Barrett died at the age of sixty. His death was a result of complications of diabetes.