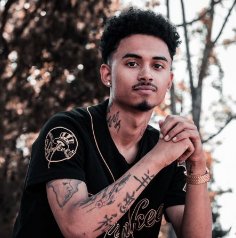 There are multiple artists by the name Tay.

TAY (Tiago Amaral) (born 17 February 1999) is a Portuguese trap/ R&B singer and self-taught dancer. He is regarded by his fans as the pioneer of Lit Dance in Portugal and was nominated at the 2019 MTV Europe Music Awards for best Portuguese Act.
He started posting his own songs on his YouTube channel in 2018, but it was with his single "Pensa Bem" featuring Dylan that he gained national recognition. The song got achieved the number one spot on the trending Youtube page in Portugal and has over 8 million views. His follow up single, Não Preciso, also featuring Dylan, achieved a top ten placement on the Portuguese charts.

Tay is a Dubstep/Experimental Hip-Hop producer from Washington D.C.
Started production in 2007, Tay seeks to one day be signed by the LDN based label Hyperdub.