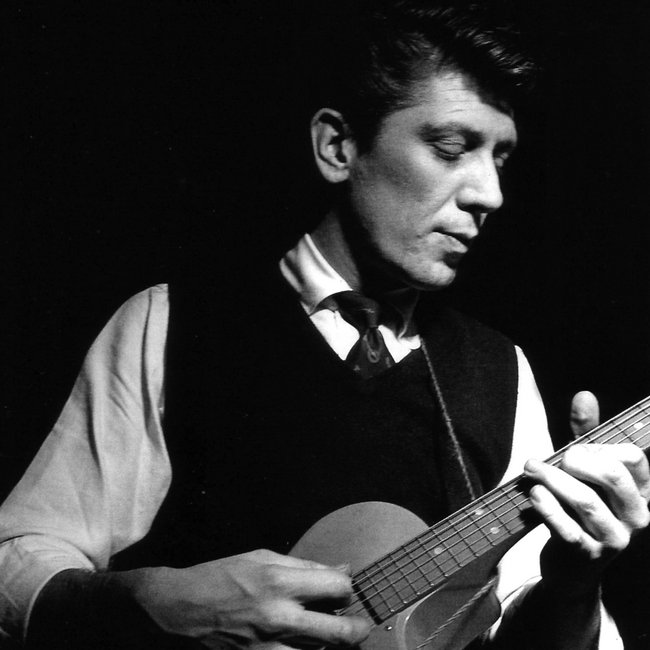 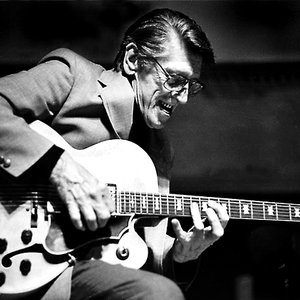 Farlow was born in Greensboro, North Carolina in 1921, with his first introduction to a stringed instrument being the mandolin (tuned like a uke), as a young child. Nearly as famous for his reluctance to perform publicly as for his outstanding abilities, he did not take up the instrument until he was 21, but within a year was playing professionally and in 1948 was with Marjorie Hyams' band. While with the Red Norvo Trio from 1949–1953, Farlow became famous in the jazz world. His huge hands and ability to play rapid yet light lines, which earned him the nickname "Octopus", made him one of the top guitarists of the era. Where other similar players of his day combined rhythmic chords with linear melodies, Farlow preferred placing single notes together in clusters, varying between harmonically enriched tones based on a startling new technique.
After six months with Artie Shaw's Gramercy Five in 1953, Farlow put together his own group, which for a time included pianist Eddie Costa. In 1958, Farlow retired from full-time performing and settled in Sea Bright, New Jersey, returning to a career as a sign painter. He continued to play occasional dates in local clubs, however. In 1962 the Gibson Guitar Corporation, with Farlow's participation, produced the "Tal Farlow" model in their prestigious Artist Model line. The production model has a mandolin-style scroll at the top of the body.

In 1968 while living in Sea Bright, Tal Farlow visited Phil Petillo's Studio Workshop every Saturday up until the early 1980s. Dr. Petillo, with legendary Tal Farlow, built what was known as the Full House Concept First Octave Divider, which was a stool that had a built-in amplifier and a pedal to control it. It provided smooth, rich warmth to the sound of the guitar with volume without distortion while allowing the artist more freedom of movement when performing. At this time, Phillip designed Tal a specialized guitar with a moving pickup that had nylon tracks underneath the pickguard to adjust the pickup in any position between the end of the fingerboard and bridge for jazz performances to suit his own individual needs, and to introduce young players to jazz and its components. They had a good creative working relationship for many years.
Farlow only made one record as a leader during 1960–1975, but emerged a bit more often during 1976–1984, recording for Concord fairly regularly before largely disappearing again. He was profiled in the documentary film, Talmage Farlow, made in 1980/81. The guitarist can be heard on his records for Blue Note (a 10" LP in 1954), Norgran (later Verve, 1954–60), and Prestige (1969), as well as those for Concord.
Farlow died in New York City on July 25, 1998.