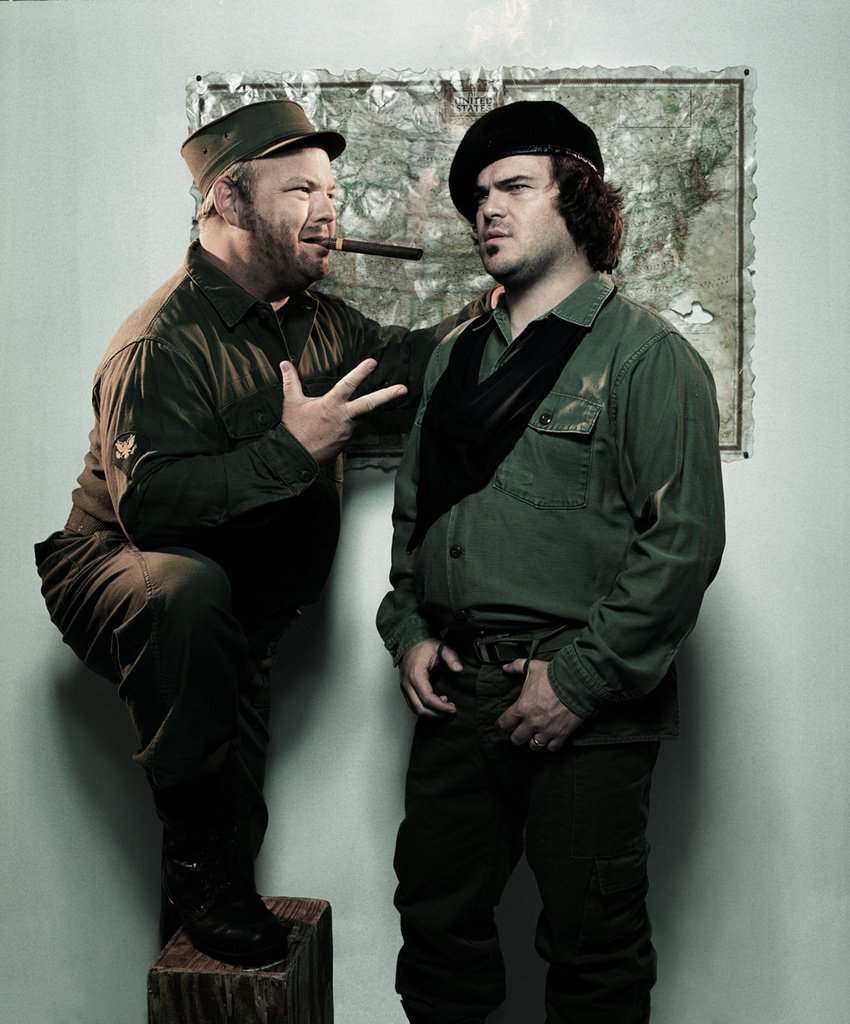 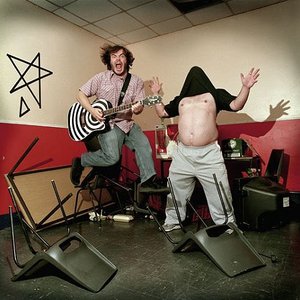 Tenacious D (often referred to as "The D" and sometimes introduced as "The Greatest Band in the world. Period.") is an American satirical rock duo formed by musicians and actors Kyle Gass and Jack Black in Los Angeles, California in 1994. Their music fuses vulgar absurdist comedy with rock music in a style that critics have described as "mock rock". The band first gained reputation in 1999, starring in a self-titled HBO TV series. The drumming on both of their albums and the devils voice on the track Beelzeboss (also the one who plays Satan in The Pick of Destiny movie) was performed by Dave Grohl (of Nirvana, Foo Fighters, Queens of the Stone Age, and Them Crooked Vultures fame).

Tenacious D's music showcases Black's theatrical vocal delivery and Gass' acoustic guitar playing abilities. Their songs discuss the duo's purported musical and sexual prowess, as well as their friendship and cannabis usage. Their debut self-titled album features absurd and humorous sketches. Music critics have compared the storyteller-style lyrics of their songs to lyrics of rock opera. In addition, they have since recorded two albums, and starred in their own movie, Tenacious D in The Pick of Destiny.

Black and Gass, at the time respectively aged 16 and 24, met in Edinburgh, Scotland during the Edinburgh Fringe of 1989. Both were members of the Los Angeles-based theatre troupe, The Actors' Gang which was performing Tim Robbins and Adam Simon's play Carnage. Initially Black and Gass did not get on as Gass felt threatened by Black - as he was the main musician for the Actor's gang - but they eventually worked out their differences, and agreed to form a band. Gass taught Black to play guitar, in exchange for Black's helping him with his acting.

Initially, Black and Kyle covered songs by Bobby McFerrin. Later they chose the name "Tenacious D" - a name derived from a term used by sports commentator Marv Albert about the tenacious defense of the NBA's New York Knicks - decided by the audience of the band's first live show, in 1994 at the now defunct Al's Bar. Other possibilities had included "Pets or Meat", "Balboa’s Biblical Theatre" and "The Axe Lords Featuring Gorgazon’s Mischief", which Gass described as being his personal favorite. In attendance was David Cross who later cast Tenacious D in his sketch comedy television series, Mr. Show.

David Cross, with the writer Bob Odenkirk from Mr Show, continued his involvement with Tenacious D by producing three half-hour shows based on the band. The series, entitled Tenacious D, premiered in 1997, immediately following an episode of Mr. Show. While a total of three episodes consisting of two shorts, ten to twelve minutes in length, were produced, only the first was aired that year; the final two episodes did not air until the summer of 2000. The series was canceled after, according to Gass, HBO offered Tenacious D ten episodes, but in doing so, they would have to relinquish their role as executive producers. Gass and Black decided to make a movie instead. Many songs that eventually were included on the band's first album were first featured on the show, though the episodes also contain songs that remain unreleased.

The six shorts were titled "The Search for Inspirado", "Angel in Disguise", "Death of a Dream", "The Greatest Song in the World", "The Fan", and "Road Gig". After the series aired, the band continued to perform. At a show at the Viper Room in Los Angeles, they met Dave Grohl, who remarked that he was impressed with their performance; this led to their cameo in the Foo Fighters' "Learn to Fly" music video. The popularity of Tenacious D further increased as they began to open for high profile acts, including Beck, Pearl Jam, and Foo Fighters.

The Devil CardSatire and comedy are a major aspect of Tenacious D's lyrical content. Gass said of their approach: "I'd love to do the straight music thing, but that's kind of against our mission, which is to rebel against the serious singer-songwriter mentality." Their songs evoke heavy metal clichés of bands like Iron Maiden and Judas Priest. In particular, the song "Dio" pokes fun at the idea of a torch being passed "Now it's time for him to pass the torch" Songs like "Friendship" parody the lack of real friendship in rock groups with the lyric "As long as there's a record deal, we'll always be friends" Other songs cover the topic of sex; "Kielbasa" discusses anal sex, while "Double Team" boasts of the duos sexual prowess. Tenacious D also employs the technique of deliberate backmasking on "Karate", a technique synonymous with bands like Slayer, who recorded a message in Hell Awaits.. The band's imagery also continues the theme of evil. The front cover of Tenacious D features Black and Gass standing naked below the Devil. Black described it as he and Gass being "schooled by Satan". The pose is similar to that shown on the Devil tarot card. The Devil card signifies sexual desire, uncontrolled energy, vice and addiction.

Tenacious D's music has been criticized for its frequent use of profanity. In addition, other critics have described the band as having exhausted the joke of "cock rock".

Black has said that the first song he enjoyed was ABBA's "Take a Chance on Me". He attributes influences from Dio, Black Sabbath, Meat Loaf and Bobby McFerrin. Gass describes their influences as being derived from "big dinosaurs of rock" such as Led Zeppelin. In addition, Gass lists his influences as being Tom Waits, Tony Hawk and Tony Robbins. The band claimed that the inspiration for the song "Tribute" came after Black played Metallica's "One" for Gass, describing it as "the best song in the world", leading to a failed attempt to themselves write an even better song.

Gass has described Tenacious D's comic assertion that they are the best band as being "ridiculous because it's a matter of opinion". Black characterizes Tenacious D's comic nature as an antidote to "the masculinity of rock", adding "There's also something funny about the macho-ness of rock. Like the bands that are the fucking hardest rocking are like, 'We'll fucking kick your ass, dude… with our rock.'"

Tenacious D also did backing vocals on the Styx song "Kiss Your Ass Goodbye". It can be found on the album "Cyclorama" from 2003.

They were included in Rock Band 2 with their song "Master Exploder".

In October of 2009 Jack Black starred as roadie Eddie Riggs in the open world video game Brütal Legend by Double Fine Productions on the XBOX 360 and Playstation 3.