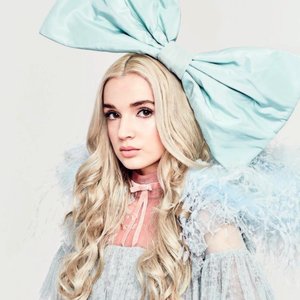 Now known as the mononymous Poppy.
Moriah Rose Pereira (born January 1, 1995 in Boston, Massachusetts, U.S.), known professionally as Poppy, is an American singer, songwriter, actress, model, and YouTube personality. In 2013, Poppy moved to Los Angeles where she rose to prominence while working with director and musician Titanic Sinclair who helped her enhance her YouTube presence by making vlogs and music videos of herself. In 2015, she was signed with Island Records, and in 2016, she released her debut extended play, Bubblebath, as That Poppy.

In late 2016, Poppy became the face of Sanrio's "Hello Sanrio" collection. In the summer of 2017, she signed to Mad Decent, and in October released her first studio album, Poppy.Computer. To promote the album she embarked on her first tour, which consisted of 34 North American cities separated by shows in London and Tokyo.

In 2018, Poppy released her web television series, I'm Poppy, and released her second studio album, Am I a Girl?.

Boasting a pastel-haired innocence, a danceable sound and a hint of underlying angst, Poppy seems to transcend classification. The doe-eyed singer-songwriter is quirky and unconventional, with a style to match. It’s this entirely unique quality that attracted the attention of Island Records, to which she was signed until the ending of 2016. “I’m so excited to do this,” she says of working with the label. “I just want people to have fun with my music and forget about their problems for a few minutes.”

Poppy grew up in Nashville, surrounded by music. Her father was a drummer in a punk band and her brother followed suit, drumming for multiple groups at once. Despite her percussive roots, Poppy had a different passion: “I was a dancer for 11 years,” she remembers. “That was my first love. But when I was in middle school I started to get made fun of a lot and music became my outlet.” To cope, Poppy began writing lyrics in her journal and listening to bands like Jimmy Eat World, No Doubt and Blondie. Finally, when it came time to choose between dancing and music, Poppy “fell in love with singing.”

Her love for music has only grown since then; she now has hundreds of journals full of song ideas and melodies. “For me it starts with lyrics and a concept,” she says of her process. “My songs usually draw on what I’m going through, what my friends are going through – even what characters in a movie are going through. I generally write about things that are going on in my world.”

Poppy’s world is certainly a colorful one, filled with roller-skating, hair dye and the latest documentaries. She loves purple and Pop Rocks and often draws on J-Pop, which is “drastically different from K-Pop,” for inspiration. “On the surface, it looks innocent and cute, but there’s definitely a darker undertone,” she says of the Japanese genre. “That really connects with personality.”

Her music exhibits the same dichotomy. Reggae-inspired beats, punky rock riffs and a candy-sweet pop sensibility infuse each of her tracks, co-existing in a wholly enigmatic manner. Her songs are irresistibly catchy, but cheeky lyrics add a depth and complexity rarely found in traditional pop songs. Lowlife showcases her dynamic vocal talent and offers mischievous lyrics like “you’re the highlight of my lowlife.” It’s both playful and powerful. Everybody Wants To Be Poppy, her self-proclaimed “theme song,” shows a clever sense of humor. “I’m just a princess with a pistol,” she sings, and it definitely rings true.