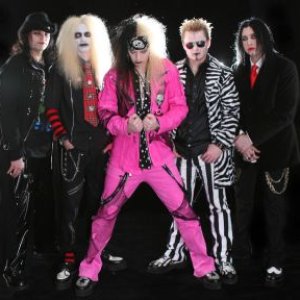 The Deadthings are a hard rock band based in Melbourne, Australia that draws influence from their idols such as Kiss, Ratt, Judas Priest, Dokken and Poison. The Deadthings then craft their own dark and grim tales of sleaze and heartbreak in their own unique melodic morbid way.

2004 saw The Deadthings release their debut EP “When Hell Sleazes Over“ to critical acclaim from Rock journalists world wide including a stellar review in UK magazine Classic Rock. Following the release the band toured extensively throughout Australia to a consistently increasing audience along the way opening up for former Muderdolls/Frankenstein Drag Queens vocalist WEDNESDAY 13 on his Australian Tour.

2005 saw The Deadthings release their first full length album “Who Killed Holly Would?” gaining critical acclaim including a 9.5/10 review from Sleaze Metal.com.
The Deadthings continued touring extensively in support of the release and began headling the larger clubs in Australia including the Hi-Fi, The Marquee and Fowlers.

With their Rock N Roll soaked in blood, guts, beer and glitter, The Deadthings continue to build a strong live following from show to show and a worldwide fan base with their infectious songs, with no plans on slowing down until the whole world screams their name!