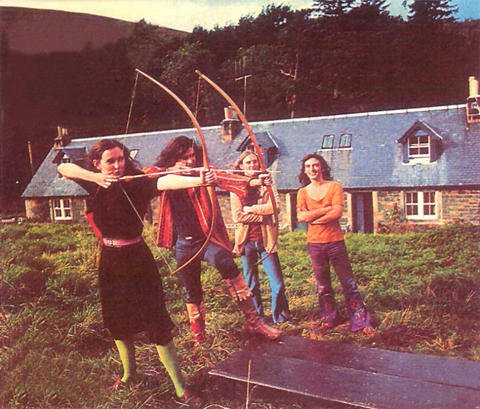 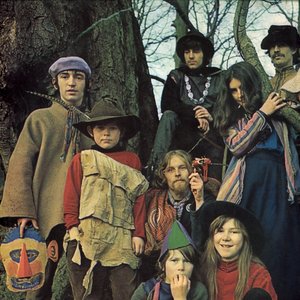 The Incredible String Band (sometimes abbreviated as ISB) was a psychedelic folk band formed in Scotland in 1966. The band built a considerable following, especially within the British counterculture, before splitting up in 1974. The group's members are musical pioneers in psychedelic folk and, by integrating a wide variety of traditional music forms and instruments, in the development of world music. The group reformed in 1999 and continued to perform until 2006.

The Incredible String Band was formed in Edinburgh, Scotland, UK by folk musicians Robin Williamson, Mike Heron, and Clive Palmer (1943 - 2014). They recorded their eponymous debut album in 1966, a lighthearted affair which revealed only the merest hint of the psychedelic adventures to come. After that, the band broke up. Palmer decamped for the Trail to Afghanistan and Williamson visited Morocco from where he returned laden with exotic instruments like the famous gimbri, which was, much later, eaten by rats. In 1967 Heron and Williamson recorded 'The 5000 Spirits or the Layers of the Onion', an audaciously eclectic mix of bookish folk music, hippy love songs and Eastern modalities. They soon became the-name-to-drop-in-interviews for luminaries such as Paul McCartney and Bob Dylan, and in their annum mirabilis of 1968 they practically defined the hippy counterculture in the extraordinary albums 'The Hangman's Beautiful Daughter' and 'Wee Tam and the Big Huge'. By then the group consisted of Williamson, Heron, Rose Simpson and Licorice McKechnie - the same line up played at Woodstock in 1969 at the wrong time, having refused to play in the pouring rain the previous day (seen by manager Joe Boyd as a great missed opportunity).

In 1970 Robin Williamson attempted to fuse the music with his theatrical fantasies in a quixotic multi-media spectacular at London's Roundhouse called 'U'. It was "a surreal parable in dance and song" and highlighted the fact that they were never destined to make much money out of things. After that they lasted another four years. By 1974 tension between Williamson and Heron, who was pushing the band into prog-rock territory, had become unbearable and they split up.

Williamson soon formed "Robin Williamson and His Merry Band" which toured and released three albums of eclectic music with a Celtic emphasis. Within a few years, he went on to a solo career, moving increasingly into traditional Celtic styles. He also produced several recordings of humorous stories. Heron formed the rock group "Heron" and later released occasional solo albums. Responding to a comment by Joe Boyd in 1997 that they hadn't spoken since the breakup in 1974, the pair got back together for two concerts. This was followed by a full reunion of the original three members plus Williamson's wife Bina and Lawson Dando in 1999. By 2001 both Robin and Bina Williamson had left. Heron, Palmer and Lawson, and new member Fluff toured regularly around the United Kingdom and internationally until an end to the tour was announced in 2006.

The music of the ISB ranges from quite conventional folk songs to innovative “art song” and hybrid forms that were a precursor to World Music. In 1967-8 they were sometimes described as part of pop music's "avant-garde", which had emerged in the wake of the more adventurous work of The Beatles, with whom they were often compared. Although they lacked the Beatles' broad pop appeal, the ISB showed a similar interest in extending the boundaries of their music. Both Mike Heron and Robin Williamson would break apart a traditional song structure, inserting seemingly unrelated sections in a way that has been described as "always surprising, laughably inventive, lyrically prodigious". While at times this resulted in a lack of conventional unity, it also opened up the song musically and thematically to allow greater depth and exploration. This aspect of their music, combined with Williamson’s soaring melismatic vocal ornamentation (perhaps influenced by Islamic chanters heard during his visit to Morocco, as well as by the Scots-Irish traditional singing with which he had grown up) made for music that still sounds fresh forty years later.