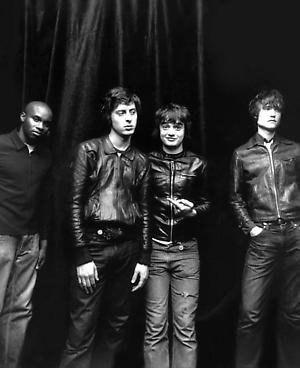 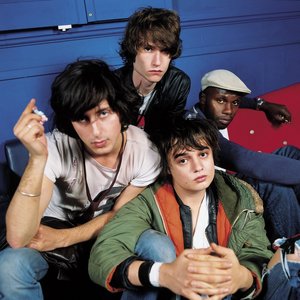 The Libertines is an English band that formed in London, England in 1997 and disbanded in 2004. They reformed in 2010 to play the Reading and Leeds festivals. The band released three full-length LPs, first two produced by Mick Jones of The Clash. Their third album was released after 11 years of silence - they reformed again in 2015. Centered around the song-writing partnership and chemistry between Peter Doherty (vocals/rhythm guitar) and Carl Barât (vocals/lead guitar), while backed by John Hassall (bass) and Gary Powell (drums), the band was one of the cornerstones of the English independent scene in the early 2000's.

Championed by NME, the band's first single What a Waster charted at number 37, despite being banned from Radio 1 and commercial radio due to an overabundance of foul language; this set the trend for steadily increasing returns, culminating in a #2 single and #1 album in the UK Charts. However, the band's music was often eclipsed by its internal conflicts, many of which stemmed from Doherty's considerable drug use, and it was mostly because of this that after a final show in Paris (without Pete) that the band was disbanded at the end of 2004.

The former members of The Libertines have gone on to form three splinter bands, with varying degrees of commercial and critical success. These bands include Peter Doherty in Babyshambles, Carl Barât and Gary Powell in Dirty Pretty Things and John Hassall in Yeti.

Pete and Carl recently came back to work on Babyshambles' charity cover of The Clash's 'Janie Jones' for Strummerville. Carl and Pete also performed 13 songs together in April 2007 as Carl appeared on stage at one of Pete's shows. On the 29th of March 2010 the Libertines announced they had reunited to play the Leeds and Reading festivals in August.

On 20 April 2014 an image of London's Hyde Park was released to the band's Facebook page. Around this time both Carl Barat and Peter Doherty indicated in interviews that they had accepted an offer to play the venue on July 5, 2014. On 25 April, it was confirmed that The Libertines will play on Saturday 5 July in London's Hyde Park, headlining the day, as part of the Barclaycard British Summer Time series of concerts. Support for the concert will be provided by a number of bands and artists, most notably The Pogues, Spiritualized, Maxïmo Park, Raglans and The Enemy

On 20 May, it was confirmed that The Libertines will play on Saturday 19 July in Benicassim FIB, Spain, as headliners.

They have also announced a European tour, their first tour in 10 years, consisting of 9 dates prior to the release of a new album in 2015, 11 years after their previous studio release.

The band's reunion album was followed by a series of festival appearances, including a surprise gig during the 2015 Glastonbury Festival, as they were secretly called to replace Florence - the Machine (who were earlier announced as unscheduled headliners after Foo Fighters' Dave Grohle's injury prevented the latters from headlining the day). The Libertines were filmed as they landed down off an helicopter outside the festival site, and stated their show with a hit from their 2nd album, Can't Stand Me Now.