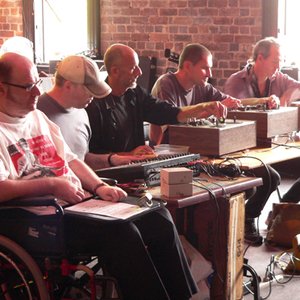 The genesis of The Loop Orchestra occured in the ashes of a simple two-tape-machine-no-man-band, The Nobodies, which died in a fire in 1980. From those ashes, and with a pastiche taken from the likes of Terse Tapes, home of Severed Heads, an ashen poultice was formed to take up further and more involved household heretical experimention, this time with reel-to-reel tape machines. This idea was subsequently expanded upon in the studio of Sydney radio station 2MBS-fm amid a group of experimental radio programmers. Two, John Blades and Richard Fielding, were using the studio equipment as an instrument, experimenting with tape machines through processes involving cutting, dissecting, rearranging and rejoining prerecorded tape, creating tape loops and playing them back. They felt a need to formalise their studio experimentation and so conceived the idea of creating a full blown machine orchestra whose contrived destiny it was to perform in the Sydney Opera House's hallowed Concert Hall.

The intention of the Orchestra was for groups of instruments of an orthodox orchestra to be represented by reel-to-reel tape machines playing loops of the instruments' sounds. Upon the realization that this egoistical ambition was doomed a smaller ensemble comprising 4 reel-to-reel machines playing slowly evolving tape-loop constructions, made its live debut playing a live-to-air performance in the rather less graceful, but no less culturally appropriate studio of Sydney radio station 2MBS-fm in 1983, as The Loop Orchestra.

In the days following the performance, enthusiastic murmurs of acclaimation rolled around the cloisters, in a sense paralleling the loops that stirred hitherto unchallenged senses in the minds of Sydney sound-art aficionados. Imbued with a desire to ring Sydney with magnetic tape, The Loop Orchestra have continued to plough a special brand of loop mastery, criss-crossing Sydney's pubs, theatres and galleries with elaborate tape loop set-ups spanning divides greater than the Sydney Harbour Bridge, playing infrequently but always with maddening fervour.

In 1990 The Loop Orchestra released its first LP. Given the extraodinary length of time between the formation of the group and the debut release it was appropriately entitled "Suspense". The Loop Orchestra unlocked its Luddite shackles in 1999 with a foray into the digital medium - the production of a compact disc, "The Analogue Years". It was followed five years later by The Loop Orchestra's first international release, the acclaimed "Not Overtly Orchestral", on Staubgold. In the same year a companion CD of cut-up poetry and music was released with internationally reknown literary journal "Southerly". There are numerous tracks included on compilations, notably of late, works on the fourth volume of Sub Rosa's "An Anthology of Noise & Electronic Music" series and Sordide Sentimental's "MIT # 02", both released during 2006.

A variety of eminent luminaries can lay claim to having been members of the Orchestra, including Patrick Gibson, Peter Doyle, Anthony Maher and Ashley Blower. The current lineup consists of John Blades, Richard Fielding, Emmanuel Gasparinatos, Hamish MacKenzie and Juke Wyat.

Members of the Orchestra have been, or are, involved in a diverse variety of groups and projects including but not limited to:
Severed Heads; Scattered Order; The Systematics; No Nights Sweat; Splendid Mess; War, Meat & The Dictator; East End Butchers; Z.glutz; Ya Ya Coral; Moral Fibro; Famous; Kinderschmerzen; Esqué; Clean Air Campaign; Hiroshima Chair; Sherrif Lindo & The Hammer; Nutcase & Papa Chubba; Men Like Licorice; Violence In Spring; Vorkapich; Kyoko-Mary & The Cogs of Death; Strict vs State; and Cannibal Loops.