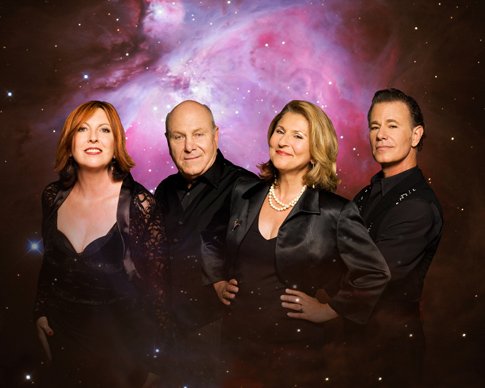 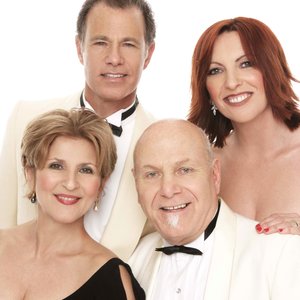 The Manhattan Transfer is the name of two incarnations of an American vocal group, with Tim Hauser being the only link between the two groups. The group’s name comes from John Dos Passos’ 1925 novel Manhattan Transfer and reflects their New York origins.

The first group, established in New York City in 1969, disbanded after producing a single album, Jukin’ (1971). This article focuses on the second line-up which was set up in 1972 and is still together. It is famous for mixing jazz, big band, and popular music styles.

It's been over thirty-five years since Tim Hauser, a former Madison Avenue marketing executive, paid his bills by driving a New York City cab while aspiring to form a harmony vocal quartet sui generis that could authentically embrace varied musical styles, and still create something wholly unique in the field of American popular song.

Hauser had been in doo-wop groups, folk groups, and even in a short-lived quintet named The Manhattan Transfer, but as the sounds of jazz, R&B, pop, rock ‘n’ roll, salsa and swing poured out of brownstones, Hauser now dreamt of four-part harmonies without limits.

On a spring evening in 1972, one of Hauser's taxi fares was an aspiring young singer named Laurel Massé, who was familiar with the only album, Jukin', by Hauser’s earlier Manhattan Transfer combo, and had seen them perform once. Realizing they shared the same musical vision, they agreed to meet again. Weeks later, another of Hauser’s fares invited him to a party where he met Brooklyn native Janis Siegel. Although already in a group, Siegel agreed to help out on some demos and before long she became the third member of Hauser's nascent group. As Hauser, Massé and Siegel began rehearsing, Massé’s then-boyfriend, who was drumming in a Broadway pit band, introduced Hauser and Siegel to Alan Paul, who was co-starring in the original stage production of Grease, and the groundwork was laid for the rebirth of The Manhattan Transfer on October 1, 1972.

In its formative years, the group began performing regularly throughout New York City at Trude Heller's, Mercer Arts Center, Max’s Kansas City, Club 82, and other cutting-edge cabaret venues. By the end of 1974, they were the number one live attraction in New York City, prompting Newsweek to send a writer to their show at Reno Sweeney’s in Greenwich Village to report on this growing phenomenon.

Massé left the group in 1978 following a serious auto accident in December of that year. (She eventually went on to launch a successful solo career.) Auditions were held to find her replacement, and a young singer/actress from Mt. Vernon, Washington responded to the call. The group was completely knocked out by her dazzling performance, and Cheryl Bentyne was immediately invited to join the group.

Their next album, Extensions, earned them their first domestic pop hit, "Twilight Zone/Twilight Tone", penned by Alan Paul and Jay Graydon. The album also featured "Birdland", the piece that has since become the foursome's signature tune. Jon Hendricks wrote the lyrics to Joe Zawinul's stirring jazz fusion instrumental, and Siegel arranged the vocals. The most played jazz record of 1980, "Birdland" won The Transfer their first Grammy award the following year (for Best Jazz Fusion Performance, Vocal or Instrumental), as well as the award for Best Arrangement for Voices, which Siegel took home.

In 1982, The Manhattan Transfer made music history by becoming the first group to win Grammy Awards in both pop and jazz categories in the same year. "Boy from New York City", which broke into the top 10 on the pop charts, garnered them the award for Best Pop Performance by a Duo or Group with Vocal, and "Until I Met You (Corner Pocket)" earned them a Grammy for Best Jazz Performance, Duo or Group. Both of these appeared on the group's fifth studio album, Mecca for Moderns.

The Best of The Manhattan Transfer was released for the holiday season in 1981 and contained the best of their hits from their early Atlantic Records years, 1975-1981. Naturally, the album went Gold.

In 1983, they accepted another Grammy, for Best Jazz Vocal Performance, Duo or Group, for their rendition of the classic ode-to-the-road, "Route 66". The song appeared on the soundtrack to the Burt Reynolds film Sharky's Machine, and surfaced three years later on their Bop Doo-Wopp album. In 1984, prior to Bop's release, they repeated their previous year's Grammy win in the same category for the "Why Not!" cut from Bodies and Souls.

However, it was 1985's Vocalese, produced by Hauser, that became known as the group's tour de force effort. Vocalese is the style of music that sets lyrics to previously recorded jazz instrumental pieces. Jon Hendricks, the recognized master of this art, composed all the lyrics for the album. Vocalese included some highly complex material that ably tested the quartet's capabilities - a challenge which they met magnificently. The album became a critically-acclaimed artistic triumph.

Vocalese received 12 Grammy nominations - at the time making it second only to Michael Jackson's Thriller as the most nominated single album ever. The Transfer's opus won in two categories at the 1986 awards ceremony: Best Jazz Vocal Performance, Duo or Group, and Best Arrangement for Voices for Bentyne and Bobby McFerrin for "Another Night In Tunisia".

The album also saw the group venturing out into the world of music video. The group made five videos to the album, which were available commercially and also shown on Cinemax. Also, when The Manhattan Transfer visited Japan during the Vocalese tour, a recording was made of the shows and the group's second live album, Live, was released in 1987. An accompanying video of the live show was available commercially as well.

Then came Brasil, their 1987 recording, a ground-breaking re-contextualization of Brazilian music that pre-dated efforts by American artists such as David Byrne and Paul Simon. The group worked with some of today's most gifted songwriters, including Ivan Lins, Milton Nascimento, Djavan and Atlantic recording artist Gilberto Gil. The pieces were re-arranged, and then re-fitted with English lyrics which made them strikingly relevant, distinctly American, and "Transfer-esque" - while still preserving their Brazilian flavor.

Brasil became one of the group's greatest achievements to date, and one which they remain particularly proud of. It also became their first entire album to win the Grammy for Best Pop Performance by a Duo or Group with Vocal (1989).

In 1991, The Manhattan Transfer moved to Columbia Records for a two-album stint. The first, The Offbeat of Avenues, was produced by Hauser and marked the first time the majority of songs where either written or co-written by Transfer members. They walked away with the Best Contemporary Jazz Performance Grammy in 1992 for "Sassy", a piece boasting lyrics by Siegel and Bentyne, and music by Siegel and Bill Bodine.

In the winter of 1992, the gift that millions of Manhattan Transfer fans had eagerly awaited for finally arrived - The Christmas Album. Destined to be a holiday classic, this album was co-produced by Hauser and Johnny Mandel, who also did all the orchestrations. The group's soulful harmonies on such traditional favorites as "The Christmas Song" (with Tony Bennett) and "Silent Night", as well as the sweetly touching Lennon & McCartney classic "Goodnight", resound with sonic purity.

In 1994, Rhino Records released The Very Best of The Manhattan Transfer. Why another "Best of"? Well, the Anthology package was a bit expensive for some, and the first Best of album came out thirteen years earlier and thus missed many hits such as "Ray's Rockhouse", "Soul Food To Go", "Spice Of Life", and "Route 66". Plus, the newer CD format allowed for a much longer album than Atlantic Records' 1981 collection.

Also in 1994 the group released an album that was an enticing departure from anything they had done previously. The Manhattan Transfer Meets Tubby the Tuba, the group's first children's recording, was hailed by USA Today as a "charming rendition" of the 1945 Paul Tripp/George Kleinsinger classic. Accompanied by the Naples Philharmonic, the group humanized instruments (such as Peepo the Piccolo and Captain Bugle) to deliver the story's important message: "Be yourself, you can't be anybody else." Commented the Los Angeles Times of the project, "One of the world's great jazz quartets turns a children's classic into a rediscovered treasure."

Their 1995 studio album, Tonin', marked the triumphant return of The Manhattan Transfer - contemporary music's premiere vocal ensemble - to the Atlantic Records' fold. Tonin' finds Hauser, Siegel, Paul, and Bentyne embarking on a project as ambitious as any of their past work, while retaining a distinct sense of fun. "'Tonin'' is a term associated with the vocal groups of the '50s and early '60s," notes Paul. "It conjures up images of a few guys standing in a tiled bathroom or on a street corner, just belting it out in harmony - they're tonin'. This album consists of songs we grew up on, music that really sparked us as teenagers."

The Manhattan Transfer's third live album is called Man-Tora! Live in Tokyo. "On the 1983 Bodies and Souls tour, the singers performed 22 dates in 11 major Japanese cities, including Tokyo, Osaka, Yokohama, Sapporo, and Hiroshima… The set contained here (released on Rhino Records in April 1996) was recorded by FM Tokyo radio on November 22 and 23 at Tokyo's Nakano Sun Plaza theater and later broadcast stateside on the Westwood One Startrack radio program. The MT's enthusiasm in their performance is inescapable, and the set list as diverse as their repertoire." - from the liner notes by Curt Gathje.

The Manhattan Transfer's next studio album was released in 1997. Swing has its emphasis in 1930s era swing music. The thirteen tracks contain some of the most classic songs of the 20th century. "Sing Moten's Swing", "A-Tisket, A-Tasket", and "Java Jive" were recorded with Asleep at the Wheel. "Sing a Study in Brown", "Topsy", and "Clouds" were recorded with The Rosenberg Trio. "Clouds" (adapted from "Nuages") also features Stephane Grappelli. Ricky Scaggs is featured on "Skyliner" and "It's Good Enough to Keep (Air Mail Special)". Mark O'Connor is featured on "I Know Why (And So Do You)", "It's Good Enough to Keep", and "Choo Choo Ch' Boogie". About half of the tracks feature lyrics by Jon Hendricks. Swing was produced by Hauser. It debuted at #1 on the Billboard Jazz Chart and stayed in the top spot for nine weeks, and on the chart for over a year.

In October 2000, The Manhattan Transfer released The Spirit of St. Louis, a spirited interpretation of the music of one of the greatest musical figures of the 20th century, Louis Armstrong. Produced by Craig Street, The Spirit of St. Louis captures the vocal group at its best, with strong individual and group performances wrapped around evocative arrangements that are both a nostalgic pastiche from the 1920s to the 1950s, and a completely modern take on Armstrong. This is a loving homage to a unique voice in musical history.

Since the early 1970s, The Manhattan Transfer have been pushing and redefining the boundaries of vocal music in the context of jazz, pop and numerous other styles. Along the way, the collective efforts of Hauser, Siegel, Paul and Bentyne have earned them a healthy collection of Grammy Awards and a loyal fan base that spans the entire globe. The latest chapter in the quartet's exploratory trajectory is Vibrate, their second album on the Telarc label, released on September 28, 2004. Throughout the album's eleven tracks, the group explores both the traditional and progressive sides of jazz, plus various shades of Latin, world and pop music, and showcases its unparalleled vocal tradition.

After more than thirty-five years, The Manhattan Transfer have hardly slowed down. They have appeared at special functions such as The Essence Awards, the Goodwill Games, the Society of Singers Ella Awards honoring Tony Bennett, and a special Christmas performance for the Pope. They continue to tour, delighting audiences worldwide with their music. The members have also individually pursued solo and collaborative interests, but their focus invariably comes back to making beautiful music together.

Grammy Awards
The Manhattan Transfer have to date garnered 10 Grammy Awards; eight as a group, and two more individual awards for Siegel and Bentyne: