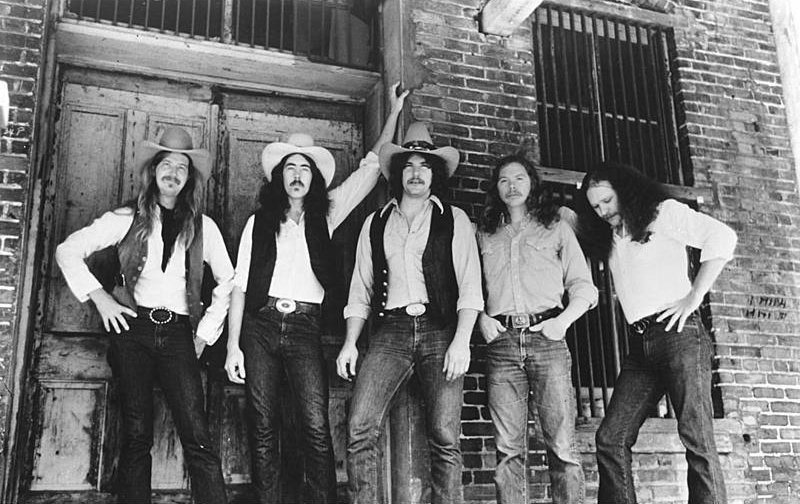 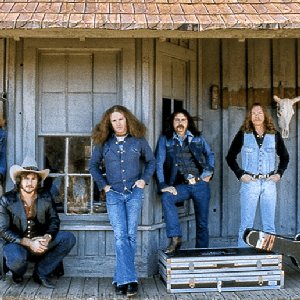 For The Outlaws, it was always about the music. For 40 years, the Southern Rock legends celebrated triumphs, endured tragedies and survived legal nightmares to remain one of the most influential and best-loved bands of the genre. Now The Outlaws return with new music, new focus and an uncompromising new mission: It’s about a band of brothers bound together by history, harmony and the road. It’s about a group that respects its own legacy while refusing to be defined by its past. But most of all, it’s about pride.

It’s About Pride is the new album from The Outlaws, a record 4 years in the making and perhaps 20 or more in the waiting. And for original Outlaws vocalist/guitarist Henry Paul, it’s a hard-fought revival whose success can be measured in old fans and new music. “Because The Outlaws have been out of the public eye for so long, it’s almost like starting over,” he explains. “But because of the band’s history, we’re seeing this as a new chapter. We’ve written and recorded this album on our own terms, and we’re out to make a significant impression. What our fans loved then they still love now, but most of all, they recognize the heart and sincerity we put in our music.” For co-founding drummer Monte Yoho, the journey is both bittersweet and jubilant. “I still think about the friends we made when we first came into this industry, how we struggled to define this thing that became known as ‘Southern Rock’,” Yoho says. “This new album embodies all the things we shared musically and personally, as well as the relationships we have with our fans to this day. It’s about where we’ve been, where we’re going, and why we still love to do this.”

History lesson: Formed in Tampa in 1972, The Outlaws – known for their triple-guitar rock attack and three-part country harmonies – became one of the first acts signed by Clive Davis (at the urging of Ronnie Van Zant) to his then-fledgling Arista Records. The band’s first three albums The Outlaws, Lady In Waiting and Hurry Sundown – featuring such rock radio favorites as “There Goes Another Love Song”, “Green Grass & High Tides”, “Knoxville Girl” and “Freeborn Man” – would become worldwide gold and platinum landmarks of the Southern Rock era. Known as ‘The Florida Guitar Army’ by their fans, The Outlaws earned a formidable reputation as an incendiary live act touring with friends The Allman Brothers, Lynyrd Skynyrd, The Marshall Tucker Band and The Charlie Daniels Band as well as The Doobie Brothers, The Who, Eagles and The Rolling Stones. Henry Paul left after the group’s third album to form The Henry Paul Band for Atlantic Records, and later the multi-Platinum country trio Blackhawk. Over the next 20- years, The Outlaws would experience rampant personnel changes, tonal missteps, ill-fated reunions and bitter trademark battles that left fans – not to mention Paul and Yoho – frustrated and saddened. And with the tragic deaths of co-founding members Frank O’Keefe and Billy Jones in 1995, and especially vocalist/lead guitarist Hughie Thomasson in 2007, it was feared that The Outlaws’ trail had come to an end.

“The Outlaws were the one area of my career where I had regrets,” admits Paul. “More importantly, I think it was the one area in my career where I thought I still have something to prove. I felt compelled to stick my neck out and take a chance of putting this band back together. I knew we would be judged, but I hoped we would be judged on our abilities.” Along with founding members Paul and Yoho, the band features several of Southern Rock’s most respected veterans: Lead guitarist and longtime Outlaw Chris Anderson is well known for his collaborations with artists that include Dickey Betts, Lucinda Williams, Hank Williams Jr., and Skynyrd. Co-lead guitarist Steve Grisham - who joined the band in mid-2013 following the medical leave of guitarist Billy Crain - is a former member of the Soldiers of Fortune era Outlaws, a noted songwriter whose tracks include The Henry Paul Band's Top 40 hit "Keepin' Our Love Alive", and a co-founder of the Southern Rock all-stars, Brothers of the Southland. Keyboardist/vocalist Dave Robbins is a co-founding member of Blackhawk and has written hit songs for artists that include Restless Heart, Kenny Rogers and Eric Clapton. Bassist/vocalist Randy Threet has performed with Pam Tillis, Trisha Yearwood and Blackhawk, and is familiar to TV audiences from USA Network’s ‘Nashville Star’. “From the very beginning, our band had a heart,” Monte Yoho says. “And a lot of people who come out and see this incarnation of the band respond to the exact same things we used to put on that stage in the ‘70s and ‘80s.”

On that stage, the band burns hotter than ever: “The Outlaws helped define Southern Rock for me and for generations of fans,” wrote music journalist Bill Robinson in June 2012 in The Huffington Post. “Seeing them onstage with The Charlie Daniels Band, Marshall Tucker Band, Allman Brothers, Lynyrd Skynyrd or countless others was, for a long time, one of the best experiences I could have. And so it was again when I saw The Outlaws play recently.” The Outlaws’ live shows – more than 150 per year – are blazing 2- hour tributes to the band’s rich history and fiery rebirth. Classic tracks and fan favorites from the first three albums – as well as The Henry Paul Band’s definitive “Grey Ghost” – share the spotlight with songs from the new disc that are already being embraced by audiences. “I think the new songs go back to those first three classic albums, when the band was proud of its influences from country, blues and jazz,” says Billy Crain. “Plus, Chris Anderson and I have honored and maybe even stepped up the legacy of the ‘guitar army’. Fans are coming away from shows feeling a part of the Outlaws experience.”

But it’s the new album – produced by Michael Bush and Henry Paul – that brings the experience home. The disc opens with “Tomorrow’s Another Night”, a scorching take on the band’s history complete with monster harmonies and a killer hook. “Hidin’ Out In Tennessee” delivers classic Outlaws country/bluegrass energy. “Born To Be Bad” is badass biker boogie and “Last Ghost Town” is kickass guitar rock. “Nothin’ Main About Main Street” is an affecting Springsteen/Seger style look at lost small-town life. “The Flame” – Hughie Thomasson’s nickname – is a potent tribute to the much-loved late Outlaw. Chris Anderson’s “Trail Of Tears” electrifies via bitter history, intense vocals and searing guitars. “Right Where I Belong”, “Alex’s Song” and “Trouble Rides A Fast Horse” could easily be lost tracks from any of the band’s first three albums. The disc’s closer, “So Long”, is a haunting re-recording of Henry’s 1979 classic. “It was the first song on the first Henry Paul Band album, and it’s the final song on this record,” explains Paul. “I wanted it to be a sort of coda to the new music, but I also want it to be a relevant part of the new Outlaws landscape. I think it’s one of the best songs I’ve ever written, and I think we’ve done an admirable job of giving it a new personality.” But the new album’s true centerpiece is its title track, co-written by Henry Paul and Billy Crain. “It’s About Pride” is both tribute and testimony from a band that has lived it all, played it all, and returns to reclaim it all.

“I’m proud to be a part of something that started long ago,” Henry Paul sings reflectively, “a Southern band of brothers bound together by the road/They came from Florida, Georgia, Carolina and Tennessee/With old guitars, tattoos and scars, straight from the heart of Dixie/And our rebel pride.” From its towering chorus to its searing guitar-onslaught finale, “It’s About Pride” is a fierce first-person anthem to the genre, delivered with the poignancy and power of absolute survivors. “It’s a very emotional song,” Paul says. “Depending on my mood and the night, sometimes it’s all I can do to get the words out without crying. It summons up a lot of images of people who are no longer with us, of times we shared standing tall together for the first time. When I first wrote the end of the second verse – ‘The reason ‘Sweet Home Alabama’ means so much to me/Is it’s about pride’ – I knew that people would feel a lot of those same emotions. It’s about an accumulated experience of separation, loss and success.” Almost instantly, the song – and the entire album – is classic Southern Rock and classic Outlaws.

Right now, The Outlaws are headed back on the road, back on the radio and back into the hearts of fans nationwide. “I’m seeing this thing we’ve had for four decades be exposed to whole new audiences,” Monte Yoho says. “We’re having a second life as a band, and it feels better than ever. Best of all, I’m still doing it with some of the same people I’ve known for most of my life.”

“I want people to hear this album and see our show and realize that The Outlaws are back,” says Henry Paul. “Our goal is to unite the fans and bring the band back into the light. In a way, this is like a second chance at my first love. It’s about finishing what we started.” For Henry, Monte, Chris, Steve, Dave and Randy, it’s about a band of brothers who love playing their own style of rock, and who 40 years ago first got the chance to take it from Florida to the world.

For The Outlaws, it’s still about the music. And now more than ever, it’s about pride.

Official Website: The Outlaws The Outlaws: The Legacy of Hughie Thomasson

There are other artist with the same name:


2) The Outlaws were an English instrumental band that recorded in the early 1960s. Among their ranks were notable musicians such as Ritchie Blackmore, Chas Hodges, Mick Underwood, Bobby Graham and Hot Chocolate's Harvey Hinsley and others.

Their name was originally conceived by Joe Meek, who needed a backing group for Mike Berry's "Set Me Free" in 1960.After that recording, they continued being one of the house bands of his recording studio at 304 Holloway Road, London. As such, they were used for recordings, demos and auditions. Many of their songs were written by Meek and credited to his pseudonym, Robert Duke. They appeared as themselves in the 1963 British film, Live It Up!.

3) From their archived info page
"Here is some more information about The Outlaws. They're Djs you know…
The Outlaws did a radio show every Friday night on Kiss 100 which some people said was the best thing ever - landing somewhere between Soulwax / 2 Many DJs and Coldcut’s Solid Steel. They were also given big features in The Face and Mixmag, so they must be really good.
The Outlaws played at Glastonbury 2003, nailing Lost Vagueness on the Saturday afternoon. In 2004 they played the Dance Tent and rocked it once again. They also found time to party at Shambala and The Glade.
You should check them out if you haven't yet: The kids go wild everywhere from New York to Ibiza, on the whole it's pretty lush. In Bristol you should look for the Outlaws nights at Bristol's best venue, The Arc."

They released one full-length DJ mix CD, Too Many Fools Following Too Many Rules, in 2004, and two EPs, From Beyond & Why Does No One Make Records Like This, in 2005, all on Love Recordings. Discogs page

The line-up included Steve Redux, as noted in this press release