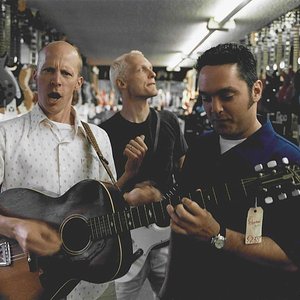 The Presidents of the United States of America

The Presidents of the United States of America, commonly referred to as simply The Presidents or PUSA is a Grammy-nominated American alternative rock band. The band formed in Seattle, USA, in 1993. The three-piece currently comprises vocalist and "basitarist" Chris Ballew, drummer and vocalist Jason Finn and "guitbassist"/vocalist Andrew McKeag. Long time "guitbassist" and vocalist Dave Dederer departed the band in 2004, after 11 years. They have released five studio albums since forming in 1993. Their whimsy electric live performances have maintained loyal fans for some time.

The band released their self-titled first album in March 1995 via PopLlama Records. After they garnered massive acclaim, Columbia Records quickly signed them. The album peaked at number six on the Billboard 200 and has shipped over three million copies. The RIAA has certified it as triple platinum. Songs "Peaches", "Kitty", "Lump", and "Dune Buggy" received major airplay.

Their 1996 follow-up album, "II", did not reach the same acclaim, though it reached the top forty on the Billboard 2000. Single "Mach 5" also garnered some airplay. The band then fell of the radar for many listeners, dropped by their major label. However, their albums of the new millennium, 'Freaked Out and Small' followed by 'Love Everybody' and 'These Are the Good Times People' (released in 2000, 2004, and 2008, respectively), picked up positive critical reviews, such as from the All Music Guide. Although their touring schedule became more sporadic into the 00s and 10s, they continue to perform and satisfy audiences with their off-beat humor and catchy hooks.