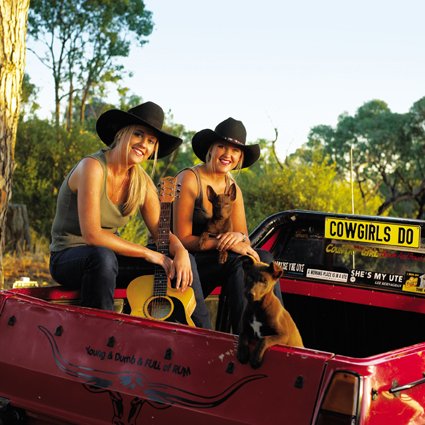 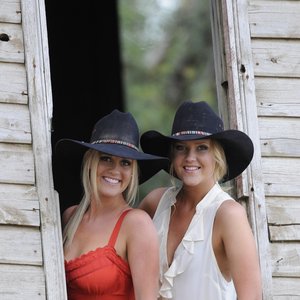 It is one of the most intriguing career trajectories in Australian country music – one more likely to have come from a film script than the harsh reality faced every day by those seeking to break through into a highly competitive business. “We’ve come a long way, so fast, that sometimes we can’t quite believe it,” marvels Sophie Clabburn, the elder half of The Sunny Cowgirls, whose infectious musical energy has garnered sales and popularity that has thrust them into a slender elite. “It’s always been a dream of ours to do this but we just didn’t think it would happen the way it has.”

The almost cinematic aspect of the rise is now oft-cited; how the plucky sisters who had worked as Jillaroos, fruit pickers, roustabouts, cattle ranch hands and even enrolled in a wool classing course, while playing country music at agricultural shows, rodeos, anywhere that would have them, landed themselves in the CMAA College of Country Music in Tamworth and at seminar on marketing and networking conducted by singer Adam Brand early in 2005. How they listened intently, took him at his word and handed over a copy of their independent album of covers and originals, Little Bit Rusty .As Sophie recalls: “I walked up to him and gave him a copy – He looked at it and he was like, oh yeah. He goes ‘I’m going to play it in my ute when I leave here’ and we were like, ‘yeah, right, he’s not going to listen to it’.”

He listened, Compass Brothers Records head Graham Thompson listened and, within what seemed not much more than weeks, chunks of Australia was listening to an album that shot straight to number three on the ARIA Country Charts (with Golden Guitar nominations to follow). There was an instant connection to two gifted creators who, as Susan Jarvis wrote in Capital News, “Have a knack of finding fresh ways of seeing the bush and new approaches to writing and singing about it.”  Reviews flowed warm and constant. The Qantas inflight magazine told its international readers:  “Australian rather than American accents, catchy tunes, great harmonies, lyrics that make you laugh (“gone like a beer on a Friday night”) and kick-arse rhythms.

Now, with a third album under their collective belt, it would be hard to find an Australian performance and recording act so true to its origins, so intuitively in touch with its audience and so able to meet its needs and desires.

There is nothing quite like the assurance of success – which has come in the shape of two albums that are amongst the very highest-sellers in their label’s catalogue “At the start we weren’t sure if we’d be taken as a joke or seriously” Sophie admits. “We’re a bit different – its  a mixture of the traditional, of country rock, comedy and loud drinking songs.”  Which is fairly to be expected from a couple of girls who came through adolescence listening to Slim Dusty, John Williamson, Chad Morgan and Johnny Cash on one hand and Nirvana and Red Hot Chili Peppers on the other, and now enjoy the likes of Terri Clark, and Australian peers and comrades – Adam Brand, Lee Kernaghan, Gina Jeffreys, Melinda Schneider and Sara Storer.

That assurance has provided a solid base from which to prepare and offer an ambitious third album – Dust Will Settle. “This is our best yet” enthuses Sophie. “I’m excited and also a little nervous about it. This time around we’ve tried to steer a bit of a different course. Perhaps as we get older the songs are not so lighthearted, they’re more grown up. I hope they realise it’s still us, the same girls.”

Unmistakably so. Certainly the songs are as sprightly, energetic and engaging as those on the first two albums but with a greater depth and diversity. It’s very much a song driven album, with five of them penned by younger sister Celeste. “Celeste has a very exciting future as a writer,”  said one recent reviewer and her big sister is not inclined to disagree. “She’s really growing as a writer,” observes an admiring Sophie. “They’re great songs, we were all happy to put them on.”   She had begun her own writing odyssey early with some of the originals on Little Bit Rusty written when she was just 15. There’s a telling intuition that comes from “Growing up in the bush – it gives us a connection, we’re one of them.” And as she told Susan Jarvis after the second album Long Five Days in 2006, “We always write from what we know – feelings, experiences, stories we’ve heard – and we record in a way that reflects our live shows.”

Live performances – spirited and seductive – are pivotal to the Sunny Cowgirls sudden, inexorable rise. “We just love playing to huge crowds of country people because we feel right at home and they really relate to our music,” says Sophie. And played to them they have – at the Gympie Muster and two years running at the Deniliquin Ute Muster which they nominate as their prime concert memories. “We get a great reaction all over, and some places stand out, like Mackay and Toowoomba …… and Mulgildie this little ghost town in Queensland. I suppose our core audience is the B&S Ball and Ute crowd. They’re mostly 18-25 and pretty wild but a lot of older people also come to our shows. So we do an acoustic sit-down set, tell stories.” Stories are drawn from a life that saw them grow up on the Sunninghill farm at Dunkeld in rural Victoria then shifting to Western Australia when Sophie was 12 and Celeste 8. At high school in Perth the sisters stood apart – “We were the only kids wearing Blunnies and stuff” Celeste once related. “We’ve never been into the city culture – it just doesn’t suit us. As soon as school was over we headed back to the bush”.

That’s essentially where they have stayed, spread out on acres with room for their beloved old Holden utes (as the bumper sticker seen on the cover of Little Bit Rusty declared: ‘A Woman’s Place Is In A Ute’). “Living in Tamworth we’re still able to go around the country” says Sophie. “The Central Coast, where a lot of Australian country artists are based, just didn’t work for us. We’ll always be country girls.”

Inspirational, role model ones too. “Young girls come and tell us they want to grow up and drive utes, have dogs, play guitar, sing songs, have lots of fun – just like us. Kids 4-5 know the words to all to our songs. It’s a bit of a worry because there’s a fair few drinking songs. Oh dear!” And now there’s the cheeky Naked, which was inspired by a song Sophie had heard by her old W.A. mate Courtney Murphy, I Think About You Naked. Oh dear, indeed.

Destined for much raucous recycling is anthem-on-the-rise – Live It Loud. “We know that’s going to really go off live” laughs Sophie, “Grog Monster and Dancing On The Darling too.”  She nominates the affecting Pink Galah, which arrives at particularly satisfying time in her emotional life, as “the most personal song I’ve ever written. It came to me sitting on the verandah at home one day; I was thinking about how galahs and parrots have a life partner.” The album’s title track also has layers beyond the surface. “It actually refers to depression,” she reveals. “When you grow up in the county you see it around you. The effect of drought on people is not widely understood. But it’s not a depressing song; it’s a song about hope, about coming out the other side of trials because, in time, the dust will settle.”

Rabbit may have an obvious Australian connection but was in fact inspired by the works of a prim Englishwoman born in the century before last. “I’ve always had a thing about foxes and rabbits” details Sophie, “ever since I read the Beatrix Potter books when I as really young. Mr. Todd the fox scared me half to death but I never forgot him.”  Celeste was similarly inspired to pen the sweetly serenading Kelpie, which was inspired by a poem she once came across. “Celeste is a mad kelpie lover,” confirms Sophie. ‘She’s always wanted to write a song about a dog and now she has, and it’s a really good one!”

Produced by Graham Thompson, who has one of the country’s best strike rates, Dust Will Settle is an elastic album that rolls out and over you. It concludes with a classic, though underheard, 60s hit that he suggested the girls work up as a duet with their mentor Adam Brand. Someday was a 1966 top ten solo hit by Tony Barber, guitarist for the original hit lineup of Billy Thorpe & The Aztecs (He’d also penned that group’s first hit, Blue Day). It is a rollicking piece they can’t wait to take out on the road. “Someday is a super-fun song to sing,” confirms Sophie. “It’s always hard work but we really look forward to touring – to see what our audience gives back to us. I do find it hard to find time to write on the road, it gets stressful, but once we have the songs done all we want to do is play them to people. We get asked if we’re looking to go overseas and, while I guess I’m curious about Nashville and maybe going there to suss it out, there’s no real urge because the people we play to here can be so incredible.”

What becomes evident, when the Sunny Cowgirls get on a stage, is how much these two sisters (now 21 and 25) spark off each other. “We’re very happy people and we’re best mates - I hope that comes across on the album” says Sophie. “I may be four years older but I’m not the boss. ‘Less is good at giving it back!”