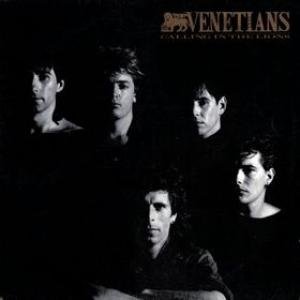 The Venetians formed in late 1982, when Rik Swinn (lead vocalist) arrived in Australia with a 24-track master demo of a song he'd recorded in England. He read a newspaper advert placed by two musicians looking for a lead singer. Within weeks, Swinn hooked up with Dave Skeet (guitar and vocals), Matthew Hughes (keyboards), Peter Watson (bass guitar) and Tim Powles (drums) to form Venetians.

"The chemistry was definitely there from the beginning," says Swinn.

The Venetians released their first single "Sound On Sound" in 1983, a version of Swinn's original demo. The band signed with Festival Records' Parole Records label. Though accompanied by a video which attracted a lot of airplay, "Sound On Sound" failed to chart significantly. Their second single "Chinese I's" generated some chart action while the band began to build their reputation as a live act. They also began work on their debut album, Step Off the Edge, produced by Vic Coppersmith-Heaven. Following the release "Ooh La La" as the first single from Step Off the Edge, they got their first major break: as opening act on the Split Enz's "Enz With A Bang" farewell tour. This led to further major tour activity with Icehouse and Nik Kershaw. By 1985, they were an Australian live attraction in their own right. The band released the second single "Shine The Light" in February 1985, and the album Step Off The Edge in May 1985.

Near the end of 1985, Venetians went into the studio with producer Mark Opitz to cut two songs, including the chartbusting "So Much For Love." As the band worked with producer Peter Blyton on the second album Calling In The Lions, "So Much For Love" scaled the Australian singles charts, peaking at number three on the national charts in March 1986. The Venetians then embarked on a two-month Australian tour, with The Church, and released "Inspiration," their follow-up to "So Much For Love." Both singles, and a third "If Somebody Loves You" are featured on Calling In The Lions, their first album released on the Chrysalis label. Chrysalis releasing Calling in the Lions and the single "So Much for Love" in the United States.

With the departure of Matthew Hughes in 1987, the Venetians spent the next year recording their third album, Amazing World. It produced three singles, "Amazing World", "Bitter Tears" and "Must Believe", but the chart success of Calling in the Lions wasn't to be repeated and the band broke up the following year.

Since 1994 Tim Powles has played drums for Scribble !985-1986), The Divinyls (1989), Angry Anderson Band (1990) and The Church where he currently plays a key role in both the management of the band and also the band’s recording process, producing their last three albums. Dave Skeet has also been involved with producing various albums, included projects at Tim Powles' Spacejunk studio.