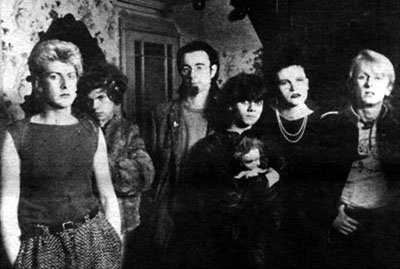 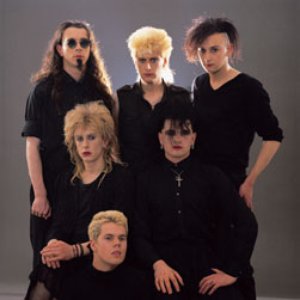 The Virgin Prunes was an Irish post-punk rock band. The band formed in 1977 and disbanded in 1986 after the departure of member Gavin Friday.

The band consisted of childhood friends of U2's Bono and The Edge. Lypton Village was a 'youthful gang' created by Bono, Guggi and Gavin in the early 70s, where every member got a new identity and where they could escape from dreary and predictable Dublin life and be anything they wanted to be. It was both lead singers Gavin Friday (Fionan Hanvey) and Guggi (Derek Rowan) who first gave a teenaged Paul Hewson his alter-ego and world-famous moniker… 'Bono Vox of O'Connell Street', later simply 'Bono'. Known for its outrageous and controversial stage performances led by the bands' theatrical singer/songwriter Friday, they first began playing small shows in Dublin gaining them a cult audience and ridicule from the culturally conservative community. With an audience the band were able to issue their first single in 1980, the independently-produced "Twenty Tens (I've Been Smoking All Night)," which led to a deal with the Rough Trade Records.

1981 to 1982 would see the band release many innovative and creative projects such as "A New Form of Beauty", a project that contained four chapters and was released in various formats. In 1982 the Virgin Prunes released their debut album …If I die, I die. Heresie, a French boxset, was also released. The boxset was a performance-art piece which mixed studio and live recordings together.

A new drummer was also brought in during this period, Mary D'Nellon taking over for Binttii.

In 1984 both Guggi and Dik Evans, unhappy with the music business, left the band. This forced drummer, Mary D'Nellon to take up the guitar and allowed Pod to return as the band's drummer. The Virgin Prunes started to record the album Sons Find Devils, which has never been released.

In 1985, confusingly enough, a retrospective video titled Sons Find Devils was released; this video had nothing to do with the unreleased album of the same name. Later that same year, Over the Rainbow, a compilation of rarities, was also released.

In the summer of 1986 the band, now a four-piece recording music written for 'Sons Find Devils', finally released a new album, The Moon Looked Down and Laughed. Also that year frontman Gavin Friday left the group. His departure was confirmed in the liner notes of the band's 1987 live album The Hidden Lie which contained a short statement confirming the band's break-up.

After disbanding as The Virgin Prunes, D'Nellon, Strongman and Busaras formed an offshoot group called The Prunes, which released three albums between 1988 and 1990 (Lite Fantastik, 1988; Nada, 1989; and Blossoms & Blood, 1990). Dik Evans played on The Prunes' album Lite Fantastik.

Note: Guggi and Strongman's youngest brother Peter Rowan (nicknamed 'Radar') was the little boy whose image has appeared on countless U2 album and single sleeves over the years, most notably 'Boy', 'War' and 'Best of 1980-1990'. Peter is now an acclaimed professional photographer in Dublin, recently utilizing the new spelling 'Rowen' for his surname in order to avoid confusion with the American bluegrass musician Peter Rowan.

In 1998, Cleopatra Records re-released the Sons Find Devils video, along with a soundtrack album on CD. This was the first commercially-available Virgin Prunes material to be released since 1993 and, for a few years, the only commercially available full-length Virgin Prunes album on compact disc (though studio recordings of the songs "Baby Turns Blue," "Pagan Lovesong," and "Caucasion Walk" had cropped up on CD compilations of various Goth and other dark/avant-garde post-punk bands).

Gavin Friday has since had a reasonably successful solo career in both music and film. Guggi remains an influential artist in Dublin. Dave-id still records as a solo artist in Ireland. After 20 years of self-imposed seclusion from the rock world, Dik Evans recently gave an overview of his and brother Edge's early years in U2 for the December 2005 issue of 'Word Magazine'. Trevor, Mary and Anthony Murphy live quietly throughout Europe.

As of 2004, Daniel Figgis is currently composer in residence with Dun Laoghaire/Rathdown, Dublin. He has also released a considerable amount of solo material, both vocal and all-instrumental, since departing from The Virgin Prunes.

After much talk, years of anticipation from fans, and with much input from the band, The Virgin Prunes' discography was remastered and reissued on Mute Records, which included …If I Die, I Die, the Moon Looked Down and Laughed, Over the Rainbow, Heresie and an album of selections from the A New Form of Beauty series.

As of 2006, Bono, Gavin and Guggi continue to be the figurative 'Three Musketeers' of Baile Átha Claith, having remained best friends for nearly 35 years while sustaining positive influence in Dublin culture, politics and re-development.