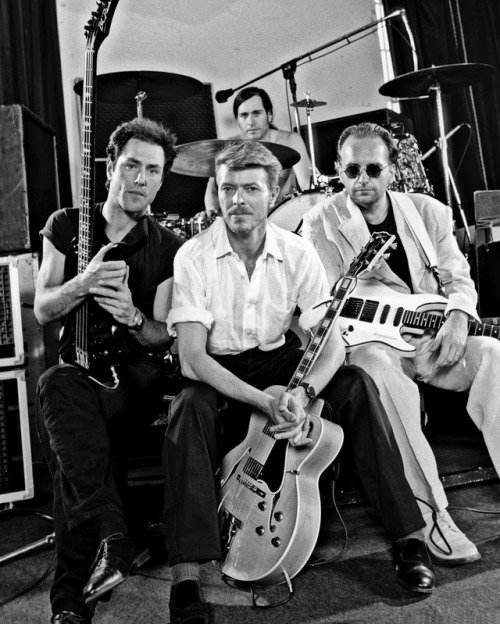 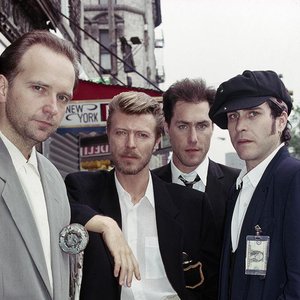 Tin Machine was a hard rock band formed in 1988, famous for being fronted by singer David Bowie.

The group recorded two studio albums and a live album before dissolving in 1992, when Bowie returned to his solo career. The group was generally reviled, often receiving scathing critical reviews.

David Bowie’s Never Let Me Down album (already a move into slightly "harder" rock territory) and subsequent "Glass Spider Tour" had been savaged by critics, and the singer was aware of his low stock. Eager to return to making music for himself rather than the mainstream audience he had acquired following the Let's Dance album, Bowie began collaborating with Reeves Gabrels (who pushed the singer to rediscover his experimental side and went on to work closely with Bowie for much of the next decade) and multi-instrumentalist Erdal Kizilcay on new material in 1988. The first fruits of this came with a new version of Bowie’s 1979 song "Look Back in Anger", performed at the "Intruders At The Palace" benefit concert on 1 July 1988. They then began to plan a concept album based on Steven Berkoff's play East as a Bowie solo album, but this idea was scrapped. Bowie and Gabrels began working with producer Tim Palmer on new material. Bowie then recruited brothers Hunt Sales and Tony Sales (the sons of comedian Soupy Sales) as a rhythm section. Bowie had worked with them on Iggy Pop’s Lust for Life album and ran into them at a party in Los Angeles around this time.

The Sales brothers moved the tone of the sessions in Nassau away from art-rock and more towards hard rock, and Bowie looked to one of his favorite bands at the time, Pixies, for inspiration. The Sales brothers heckled Bowie into greater spontaneity, with most songs recorded in one take, and lyrics left unpolished, thus giving the band a ragged, punk rock edge similar to the Pixies.

The group chose the name Tin Machine after one of the songs they had written (Gabrels would later credit the Sales brothers with this choice). The group set up allowed Bowie a certain level of anonymity, much needed after his 1980s overexposure, and he was happy to let the rest of the band (notably Hunt Sales) take the lead in interviews.

The band’s self-titled first album (Tin Machine) produced mixed but generally positive reviews on release in May 1989, picking up favorable comparisons with Bowie’s three more recent solo albums. However, many critics were scornful of Bowie’s latest attempt to reinvent himself as a bearded band-member. Commercially, the album initially sold well, reaching #3 in the UK charts, but sales quickly tailed off. The band undertook a low-key tour in small venues between 14 June and 3 July 1989, before further recording sessions in Sydney, Australia. During these sessions Tin Machine contributed to a surfing compilation album called Beyond the Beach, with a new instrumental song titled "Needles on the Beach.

The group then went on hiatus while Bowie conducted his solo "Sound-Vision Tour." In December 1990, Bowie split from EMI. Both parties stated that the split was amicable, although it is believed EMI refused to release another Tin Machine album in an exasperated attempt to secure another album similar to Let's Dance. In March 1991, the group signed to Victory Music, a new label launched by JVC and distributed worldwide by London Records and Polygram, and recorded more new material. This was combined with tracks from the Sydney sessions to form Tin Machine II album. This time the commercial success was even more fleeting, and Bowie was already tired of being shackled to a group set-up. From 5 October 1991 to 17 February 1992, the group undertook a larger tour, known as the "It's My Life Tour". The band was joined on this tour by guitarist Eric Schermerhorn, who would go on to play with Bowie's friend Iggy Pop.

Tracks from this tour were released on the July 1992 album Tin Machine Live - Oy Vey, Baby. Shortly afterwards, Bowie returned to solo recording with his single “Real Cool World” and the band dissolved.

Bowie promised Tin Machine III or at the very least a boxed-set of unreleased material in the mid-1990s, but his solo career had taken precedence, making him reluctant to dedicate energy to an old project. He continued to work with Gabrels, spanning four albums after Tin Machine: Black Tie White Noise (Gabrels contributed to only one track), Outside, Earthling, and Hours. After the last album, Gabrels felt that Bowie was moving in a softer, gentler direction that he did not want to travel in, so the two parted ways professionally. In some interviews he has also indicated his disappointment in the retrospective projects Bowie was planning at the time (the Toy album, which never surfaced, as well as the Ziggy 2002 project) played a part in his parting with Bowie.