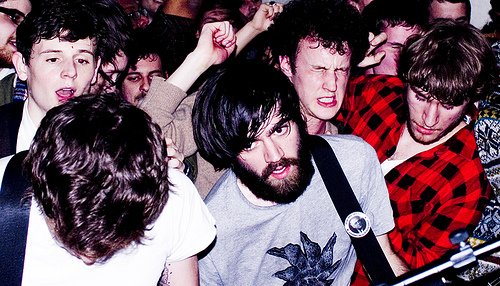 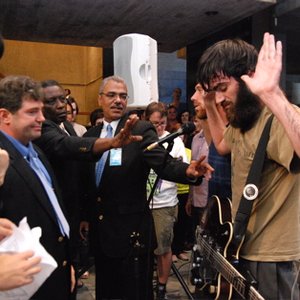 Titus Andronicus are an experimental rock band which formed in Glen Rock, New Jersey, United States in 2005. They consist of Patrick Stickles (vocals, guitar), Julian Veronesi (bass), Liam Betson (guitar) and Eric Harm (drums). The band takes its name from the Shakespeare play Titus Andronicus. Titus Andronicus is known for their energetic folk/punk/indie sound (tinted with hints of New Jersey rock and early rock 'n' roll) and their use of lo-fi production.

Their debut album, The Airing of Grievances, was released on the Troubleman Unlimited record label on April 14, 2008 to many positive reviews. The album's loud, heavily distorted guitars are influenced by shoegaze, while the lyrics and song titles are references to various books and other forms of entertainment (such as the album title, from the Seinfeld episode, "The Strike", about Festivus). The Airing of Grievances was reissued on January 20, 2009 on XL Recordings.

The band's second album, The Monitor, was released on March 9, 2010 through XL Recordings to wide critical acclaim, and was cited as one of the best indie albums of the year.

The band has a sizable list of former members, the latest of which, Amy Klein, left the band on October 24, 2011.

Top Tracks
1) A More Perfect Union
2) Titus Andronicus Forever
3) Titus Andronicus
4) My Time Outside The Womb
5) No Future Part Three: Escape from No Future
6) Fear And Loathing In Mahwah, Nj
7) A Pot in Which to Piss
8) Four Score and Seven
9) Arms Against Atrophy
10) To Old Friends and New
11) Joset of Nazareth's Blues
12) The Battle of Hampton Roads
13) Theme from Cheers
14) Albert Camus
15) Upon Viewing Brueghel's Landscape With The Fall of Icarus
16) ...And Ever
17) Richard II
18) Dimed Out
19) No Future Part Two: The Days After No Future
20) No Future Part One
21) In a Big City
22) Ecce Homo
23) Still Life With Hot Deuce On Silver Platter
24) No Future
25) Upon Viewing Oregon's Landscape With the Flood of Detritus