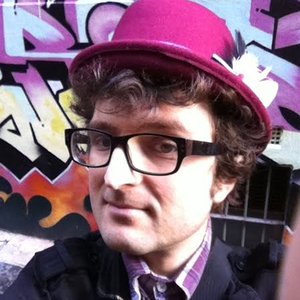 Andrew C Bulhak (acb) has been an infamous inhabitant of the internet since 1992. He claims to have once been voted "most evil person on the net", but I suspect the voting was rigged. Nevertheless, he is a central member of the Flat-Earth Society, which perhaps inspired him to create the email list called psychoceramics (the study of crack-pots). He is quite famous for having developed the Postmodernism generator, which creates, by an algorithmic process, quite convincing postmodernist doggerel essays.
acb runs a weblog called The Null Device, which has close links to Graham Freeman's Virulent Memes and collects the outpourings of his too-fecund mind. He is also a senior editor at Grouse!, the highly popular Grouse Site of the Day website.
acb is a very talented self-trained musician. Until recently he had a number of pages up at mp3.com for different acts, such as Voidhand, Gurnin' Spacecase and Laughter Like Static. The only one remaining now is vmunix, his algorithmically generated house music project. His Voidhand remix for the remix project begins with an oppressive breakbeat and various samples from Lilli Pilli Drive. Just as it's all getting too much, it breaks out breathtakingly with full vocals and reverbed cello…
acb is also responsible for the hidden track on the CD, a hilarious satire of club house which twists Lilli Pilli Drive mercilessly to its own ends. The only regret about making it a hidden track was that we had to hide its name - the Gurnin' Spacecase Baby Fur Seal mix.