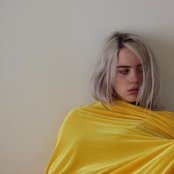 "Bored" is a song by American singer-songwriter Billie Eilish from the soundtrack album, 13 Reasons Why (A Netflix Original Series Soundtrack) (2017). The song was written by Eilish, her brother Finneas O'Connell, Aron Forbes, and Tim Anderson. Production was solely handled by Finneas. It was released by Darkroom and Interscope Records for digital download and streaming on March 30, 2017, as the lead single from the soundtrack. A mid-tempo pop ballad, the song's lyrics see Eilish sing about finally discovering her former lover's mistakes. The song has received generally mixed reviews from music critics, with a number of them deeming it as forgettable.

The song has been certified gold or more in the United States, Australia, Mexico, and Poland by the Recording Industry Association of America (RIAA), Australian Recording Industry Association (ARIA), Mexican Association of Producers of Phonograms and Videograms, A.C. (AMPROFON), and Polish Society of the Phonographic Industry (ZPAV), respectively. An accompanying music video was released on June 26, 2017, and directed by Miles & AJ. In it, Eilish is shown dressed in a blue tracksuit with matching high-top Nikes while hanging off a ladder that seemingly goes on forever into endless white space. The video received positive reviews, with critics praising Eilish's performance. Eilish promoted "Bored" by performing it for her Where's My Mind Tour (2018) and When We All Fall Asleep Tour (2019). .