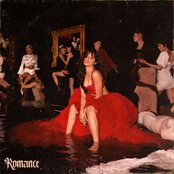 Romance is the second studio album by Cuban-American singer and songwriter Camila Cabello. It was released on December 6, 2019, through Epic Records and Syco Music. The singer recorded the album from November 2018 to October 2019. It was produced by Frank Dukes, Louis Bell, The Monsters and the Strangerz, John Hill, Andrew Watt and Finneas, among others. Camila finished recording Romance on October 31, and the next day submitted the masters for the album. On November 13, Cabello announced that the album will be released on December 6, 2019. Musically, it is a pop and R&B record that contains Latin pop and rock influences.

Romance was supported by seven singles: the double lead singles "Liar", which peaked at number 52 on the Billboard Hot 100, and "Shameless", which peaked at number 60; "Cry for Me", "Easy", "Living Proof", "My Oh My" featuring American rapper DaBaby and "First Man". The album also includes the Hot 100 number one single "Señorita", Cabello's duet with Canadian singer Shawn Mendes, from the deluxe edition of Mendes' self-titled third studio album. The standard CD's did not include the track "My Oh My".

Romance received generally positive reviews from music critics and debuted at number one in Canada, number three in the US, and in the top ten in several other countries. To promote the album, Cabello is set to embark on The Romance Tour, starting with Europe and then North America. The album was certified platinum by the Recording Industry Association of America (RIAA) in May 2020, for selling 1,000,000 album-equivalent units becoming Cabello's second album to do so, following 2018's Camila. .