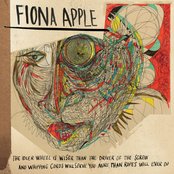 The Idler Wheel Is Wiser Than the Driver of the Screw and Whipping Cords Will Serve You More Than Ropes Will Ever Do, frequently abridged as The Idler Wheel..., is the fourth studio album by Fiona Apple. Like her second album When the Pawn…, its title derives from a poem written by Apple herself. It was released in the UK on June 18, 2012 and in the US on June 19 by Epic Records. The album debuted at number three on the Billboard 200, her highest debut yet, selling 72,000 copies in its first week. The album received a nomination at the 2013 Grammy Awards for Best Alternative Album. The album received widespread acclaim from critics, and was frequently included in year and decade-end lists by several publications; in 2020, Rolling Stone placed the album at number 213 on its list of the 500 Greatest Albums of All Time. .