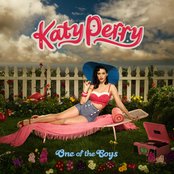 Katy Perry - One of the Boys

One of the Boys is the second studio album by American singer Katy Perry, released on June 17, 2008, by Capitol Records.

It's her first album under the stage name Katy Perry, following her debut Katy Hudson (2001), which was released under her real name on Red Hill Records. It received mixed reception from critics, with some deeming it as being filled with "potential hits" and others criticizing the material they perceived to be weak. Commercially, it debuted at number nine on the US Billboard 200, selling over 47,000 copies in its first week of sales, and also peaked within the top-ten charts in Austria, Canada, Denmark, Germany, Ireland, Mexico, Norway, and Switzerland. One of the Boys earned Perry two Grammy Award nominations, and has sold 7 million copies worldwide, being her 3rd highest-selling album to date. It has been certified triple platinum by the Recording Industry Association of America. .

3) Waking Up in Vegas