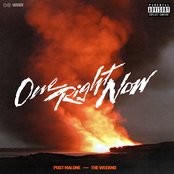 "One Right Now" is a song by American rapper and singer Post Malone and Canadian singer the Weeknd. It was released on November 5, 2021, through Republic Records, as the second single from Malone's upcoming fourth studio album. On November 2, 2021, Post Malone and the Weeknd posted a 7-second snippet of the song titled "PM&TW-ORN-Update.5.nonhyped.w1.mp3" on their Instagram accounts. The post received over 150,000 likes in just an hour. While it was initially unknown what the title of the song was going to be, Malone's manager Dre London revealed that the collaboration would be titled "One Right Now". The song marks the first time the artists appeared on a song together. Based on the teaser, the sound was described as "a synthy midtempo club track". It sees the two "harmonizing over an upbeat instrumental". Writing for Billboard, Starr Bowenbank referred to the instrumental as a "poppy synth beat". Alex Zidel of HotNewHipHop predicted that the song will "dominate the radio for the remainder of the year, and likely well into next". According to Malone's manager Dre London, the music video of the song will be released in the second week of November 2021. .