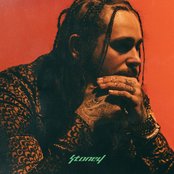 Post Malone first announced the album’s release during an interview with Zane Lowe, saying it was going to drop on August 26, 2016 and explaining the album’s title:

"We have an album coming out in August. A lot of cool shit on there. I think it’s gonna be called Stoney. Stoney Malone, that’s my old nickname." .