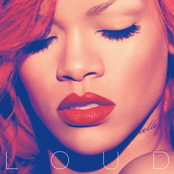 Six months after the release of Rated R, Rihanna begun work on her fifth studio album. Wanting to return to making “happy, up-tempo music,” Loud saw the departure from the personal, melodramatic themes of her previous album, bringing back the dancehall elements of her first two albums, Music of the Sun (2005) and A Girl Like Me (2006).

The album was released on November 12, 2010, by Def Jam Recordings and SRP Records, supported by seven singles: “Only Girl (In the World)”, “What's My Name” featuring Drake, “Raining Men” featuring Nicki Minaj, “S&M” featuring Britney Spears, “California King Bed”, “Man Down”, and “Cheers (Drink to That)”. .

3) Cheers (Drink To That) (Album Version)