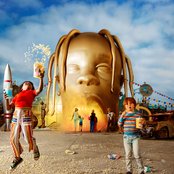 AstroWorld (stylized as ASTROWORLD) is the third studio album by American rapper Travi$ Scott. It was released on August 3, 2018 by Grand Hustle Records, Epic Records and Cactus Jack Records. The album succeeds the release of Scott's album Birds in the Trap Sing McKnight, released in 2016, and the collaborative album Huncho Jack, Jack Huncho with Quavo, released in 2017. The album was supported by the single Butterfly Effect. .

5) STOP TRYING TO BE GOD