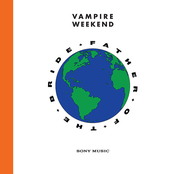 Vampire Weekend - Father of the Bride

"Father of the Bride" is the fourth studio album by American indie rock band Vampire Weekend. It was released on May 3, 2019 by Columbia Records as their first album on a major label.

The release marked the band's first project in nearly six years, following "Modern Vampires of the City", and the group's first project since multi-instrumentalist and producer Rostam Batmanglij's departure from the group. It was primarily produced by Modern Vampires of the City collaborator Ariel Rechtshaid and lead singer Ezra Koenig, and features numerous external collaborators, including Danielle Haim, Steve Lacy, Dave Macklovitch of Chromeo, DJ Dahi, Sam Gendel, BloodPop, and Batmanglij. The pop and indie rock album is musically diverse and heavily referential, contrasting heavy and direct lyrics against a bright spring-time musical mood, with its wide range of influences including country music and jam bands.

The album was preceded by three double singles: "Harmony Hall" / "2021", "Sunflower" / "Big Blue" and "This Life" / "Unbearably White". Upon release, it received widespread acclaim from music critics, earning the band their second Grammy Award for Best Alternative Music Album as well as their first nomination for the Grammy Award for Album of the Year. It was also a commercial success, becoming the group's third consecutive album to debut at number one on the US Billboard 200. The band promoted the album with a global tour, featuring an expanded seven-person lineup.

The album's simple cover artwork depicts a globe in a cartoon style that has been compared to the aesthetics of 1960's grass-roots group Another Mother for Peace, 1990's environmentalism and the early internet. The artwork also places emphasis on the Sony Music logo, and has been described as "in keeping with Koenig’s idiosyncratic idea of kitsch". Discussing the cover, Koenig commented that he "always knew wanted the Earth to be on this raw digital white background", and expressed interest in the idea of "bright, raw whiteness", such as on a blank piece of paper or the peak of a mountain, as well as on digital screens, relating the idea to the track "Unbearably White". He also stated that the artwork relates to the album's motif of ecology, and a nostalgia for the optimism of environmentalism in the 1990's. He initially considered using the poster for anime film "Mobile Suit Gundam 00 Special Edition III: Return the World" as the album's artwork, but decided that due to the album's length "the album cover ha to be incredibly simple. Not full of texture and detail". Koenig has likened this simplicity to the covers of other double albums such as the Beatles' "White Album", Fleetwood Mac's "Tusk" and Bruce Springsteen's "The River".

I didn't want it to be a cool photograph of the earth in space, I wanted it to have a little bit of that tension of being Mother Nature, the planet that we live on, but also something border-line uncomfortable with that raw digital whiteness just surrounding it. - Ezra Koenig .

9) Married In a Gold Rush