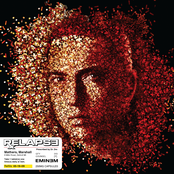 rap Eminem hip hop Hip-Hop We Made You

Eminem - We Made You

[Talking]
Guess who? Did you miss me?
Jessica Simpson, sing the chorus!

[Verse:]
Back by popular demand
Now pop a little Zantac for antacid if you can
Get ready to tackle any task that is at hand
How does it feel? Is it fantastic? Is it Grand?
Well look at all the massive masses in the stands
Shady man, No, Don't massacre the fans
Damn, I think Kim Kardashian's a man
She stomped him just cause he asked to put his hands on her massive
Gluteus maximus again
Squeeze it then squish it then pass it to a friend
Can he come back as nasty as he can?
Yes he can can, Don't ask me this again
He does not mean to lesbian offend
But Lindsay please come back to seeing men
Samantha's a two, Your practically a ten
I know you want me girl, In fact I see you grin
Now come in girl

[Verse 2:]
The enforcer, Lookin for more women to torture
Walk up to the cutest girl and charlie horse her
Sorry Portia but what's Ellen Degeneres have that I don't
Are you telling me tenderness?
Well I could be as gentle and as smooth as a gentlemen
Give me my Ventolin inhaler and two Xenadrine
And I'll invite Sarah Palin out to dinner then nail her
Baby say, "Hello" to my little friend
Brit forget K-Fed, Let's cut out the middlemen
Forget him or gonna end up in the hospital again
And this time it won't be for the Ritalin binge
Forget them other men, girl, Pay them little attention
And little did I mention that Jennifer's in love with me
John Mayer, So sit on the bench
Man I swear them other guys, You give them an inch
They take a mile, They got style but it isn't Slim

And that's why my love you'll never live without
I know you want me girl
Cause I can see you checking me out
And baby you know
You know you want me too
Don't try to deny it, baby
I'm the only one for you

[Verse 3:]
Damn girl, I'm beginning to sprout an Alfalfa
Why should I wash my filthy mouth out?
You think that's bad, You should hear the rest of my album
Never has there been such finesse and nostalgia
Man Cash, I don't mean to mess with your gal
But Jessica Alba, Put her breast on my mouth, bro
Wowzers! I just made a mess in my trousers
And they wonder why I keep dressing like Elvis
Lord help us, He's back in his pink Alf shirt
Looking like someone shrinked his outfit
I think he's 'bout to flip, Jessica
Rest assured, Superman's here to rescue ya
Can you blame me?
You're my Amy, I'm your Blake
Matter fact bake me a birthday cake
With a saw blade in it to make my jail break
Baby, I just think you just met your soul mate
Now break it down girl

"We Made You" is a song by American rapper Eminem from his sixth studio album "Relapse". It was released as the second single from the album on April 7, 2009. "We Made You" was written by Eminem, Andre Young, Dawaun Parker, Mark Batson, Trevor Lawrence Jr. and Walter Egan. Production was handled by Dr. Dre, with Eminem and Doc Ish serving as additional co-producers. "We Made You" received generally positive reviews from music critics, and became a success, peaking inside the Top 10 in fourteen countries and at number nine on the Billboard Hot 100. Just like "Shake That", this single is known for being a departure from the serious tone of his second released singles from his previous albums such as "Cleanin' Out My Closet", "The Way I Am" and "Like Toy Soldiers", instead having a more comedic tone. It features chorus vocals by Charmagne Tripp. Produced by Dr. Dre and co-produced by Doc Ish and Eminem himself, the song samples "Hot Summer Nights" by Walter Egan. The official cover for the single is a picture of the music video, with Eminem, Oxen, Lisa Ann and Bobby Lee. "We Made You" has generally positive reviews from contemporary music critics. Daniel Kreps of Rolling Stone magazine gave it a positive review stating, "It's nice to see Eminem goofing around again after a few years out of the spotlight during which he grappled with serious issues like the death of his friend Proof, and 'We Made You' with its damnation of current celebrities will likely prove to be a solid pop cultural time capsule of this weird 2009 moment we're experiencing now. Billboard said, "Atop Dr. Dre's marching beat is primarily piano instrumentation, which amid drums and tubas give the track a carnival feel... And in case his word play was too fast and strange accent too difficult to decipher, Charmagne Tripp sings the chorus. Tim Jonze of The Guardian however, reported, "'We Made You' is not Eminem doing what he does best. "We Made You" sold 167,000 downloads in its first week to enter the Hot Digital Songs chart in Billboard Magazine at number three. The song also debuted at number nine on the Billboard Hot 100, to become Eminem's second top ten in a row on the chart, ranked "Crack a Bottle", a collaboration with Dr. Dre and 50 Cent. This marks the first time that Eminem has had back-to-back top-ten hits on the Hot 100 as a lead artist since 2002, when he scored with "Without Me", "Cleanin' Out My Closet" and "Lose Yourself". "We Made You" has reached the top ten in twelve countries, including number one in Ireland, New Zealand, Australia and Germany. Development and release The single's music video was directed by Joseph Kahn, who also shot "Without Me" from The Eminem Show is in the same vein as previous videos under the Slim Shady persona, and the first of its kind since Encore's "Ass Like That". The video was filmed in Las Vegas and features guest star appearances by Dr. Dre, 50 Cent, Denaun Porter, Bobby Lee, The Palms hotel owner George Maloof, Francesca Le (playing Kim Kardashian), Melissa Peterman, Vanilla Ice, Trisha Paytas (playing Jessica Simpson's role in The Dukes of Hazzard), Derrick Barry (of America's Got Talent fame) (playing Britney Spears), actress Gabrielle Salinger (playing Amy Winehouse) and pornographic actress Lisa Ann (playing Sarah Palin). The music video for "We Made You" premiered on April 7, 2009 at 6:00 AM on several MTV networks, as well as MTV.com. The video also premiered on Channel 4 in the United Kingdom on the next day. Concept The music video parodies TV shows Rock of Love and Star Trek (with the Starfleet insignia replaced with an inverted 2nd Infantry Division), as well as video game Guitar Hero with Eminem against an imitation version background of the notes while the homage to film Rain Man was shot at The Palms, a film Eminem has previously referenced in his lyrics. Alfred Hitchcock's Psycho is also homaged. On April 3, 2009, Eminem talked about the music video in an MTV News interview, stating that there is some "Celebrity bashing in it", which is often a feature of his album's lead singles. Celebrities mocked include Bret Michaels, Kevin Federline, Britney Spears, Lindsay Lohan, Samantha Ronson, Amy Winehouse and her then-husband Blake Fielder-Civil, Ellen DeGeneres, Portia de Rossi, Jessica Alba, Elvis Presley, Tony Romo, John Mayer, Jennifer Aniston, and Kim Kardashian. Eminem even spoofed himself, wearing an ALF T-shirt and holding a cake, referencing a commonly circulated pre-fame photo of him of when he was an adolescent. The video features appearances from Lisa Ann as Sarah Palin, Trisha Paytas as Jessica Simpson, and Derrick Barry, a famous Britney Spears female impersonator, as Spears. The video also features appearances from Dr. Dre and 50 Cent as themselves. Reception The music video won the award at the 2009 MTV Video Music Awards for Best Hip-Hop Video and was nominated for Best Male Video, as well as Video of the Year. The video also ranked at#81 on BET's Notarized: Top 100 Videos of 2009 countdown. The music video also features Beats by Dr. Dre Monster headphones.