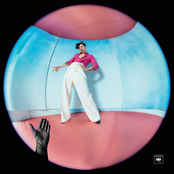 [Verse 1]
I'm in my bed
And you're not here
And there's no one to blame but the drink and my wandering hands
Forget what I said
It's not what I meant
And I can't take it back, I can't unpack the baggage you left

[Verse 2]
You said you care, and you missed me too
And I'm well aware I write too many songs about you
And the coffee's out at the Beachwood Cafe
And it kills me 'cause I know we've ran out of things we can say

"Falling" is a song by English singer and songwriter Harry Styles. This ballad was released through Erskine and Columbia Records on 7 March 2020 as the third single from his second studio album, "Fine Line" (2019). The song was written by Styles and Kid Harpoon, the latter of whom also handled the song's production. Styles and songwriter/producer Kid Harpoon first worked together on Styles' self-titled debut album (2017) on two songs: "Carolina" and "Sweet Creature". He would also become later the music director of Styles' first world solo tour. While working on his second album, Styles was seeing in the studio working on new music with Harpoon on 15 May 2019. While talking about Styles and the recording process of the album, Harpoon claimed: "He's got this wise-beyond-his-years timelessness about him. That's why he went on a whole emotional exploration with these songs. He went through this breakup that had a big impact on him." Harpoon then suggested Styles to write about his feelings towards it, saying:" He had a whole emotional journey about her, this whole relationship. But I kept saying, 'The best way of dealing with it is to put it in these songs you're writing.'" Regarding "Falling" in particular, he told: " Harry lives round the corner from me in LA and one day he wanted a lift somewhere, so I popped up there and he was getting out of the shower. I started playing piano while I was waiting for him, he was singing and in an hour we had written 'Falling'." The song was eventually released as the album's third single on 7 March 2020 to UK adult contemporary stations. "Falling" debuted at number 39 on the UK Singles Chart and later peaked at number 15, making it the fourth song from Fine Line to chart in the UK top 20. In November 2020, it received a platinum certification from the British Phonographic Industry (BPI) for selling 600,000 units in the UK. In the US, "Falling" was certified platinum by the Recording Industry Association of America (RIAA) for sales of 1 million track-equivalent units.