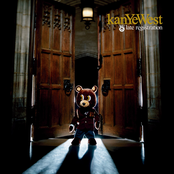 Repeated across verse]
Cutie the bomb
Met her at a beauty salon
With a baby Louis Vuitton
Under her underarm
She said I can tell you roc
I can tell by ya charm
Far as girls you got a flock
I can tell by ya charm and ya arm
But I'm lookin' for the one
Have you seen her
My psychic told me she'ya have a ass like Serena
Trina, Jennifer Lopez, four kids
An I gotta take all they bad ass to show-biz
Ok get ya kids but then they got their friends
I Pulled up in the Benz, they all got up in
We all went to Den and then I had to pay
If you fuckin' with this girl then you betta be paid
You know why
Take too much to touch her
From what I heard she got a baby by Busta
My best friend say she use to fuck wit Usher
I don't care what none of y'all say I still love her

"Gold Digger" is a song recorded by American rapper Kanye West featuring guest vocals by Jamie Foxx. Released as the second single from West's second album, Late Registration, "Gold Digger" peaked at number one on the US Billboard Hot 100 on September 6, 2005, becoming West's and Foxx's second number one single. Co-produced with Jon Brion, the song contains an interpolation of Ray Charles' "I Got a Woman" by Foxx. The single broke a record for the most digital downloads in a week, selling over 80,000 digital downloads, and was also the fastest selling digital download of all time; both records have since been broken. It was 2005's second-longest running number one on the Billboard Hot 100 at ten weeks, behind Mariah Carey's "We Belong Together". "Gold Digger" was nominated for Record of the Year at the 2006 Grammy Awards (losing to Green Day's "Boulevard of Broken Dreams") and won the award for Best Rap Solo Performance. The song lists at number 49 on Billboard magazine's All Time Top 100. The song was voted number 20 on VH1's 100 Greatest Songs of Hip Hop. Upon its release, many surmised that West conceived "Gold Digger" after watching Jamie Foxx's Oscar-winning portrayal of Ray Charles in the biographical film Ray. However, he had actually recorded the song long before the movie was even developed. West originally produced and recorded the song in Ludacris's home in Atlanta, Georgia for Shawnna's 2004 debut album Worth Tha Weight and had written the chorus from a female first-person viewpoint. However, for reasons unknown, Shawnna passed on the beat. Not wanting to let it go to waste, West decided to write the two verses for the song himself, this time from a male's point-of-view. About a year later, right before "Gold Digger" was set to be released, West decided to add a third verse and in a week the new song was recorded and mastered at Sony Music Studios in New York. The idea of employing Jamie Foxx specifically to sing an interpolation of Ray Charles' "I Got a Woman" in place of its initial sample did in fact arise from West seeing Ray with his friend John Mayer. Foxx's vocals were recorded over many takes; one version, he sang from start to finish, but the track was retracted as his performance didn't coincide well with the song's instrumentation. After recording another version, Jamie decided to re-record it once more as he felt it contained too many explicit lyrics. Once the track was in place, it was layered with additional instruments provided by Brion and individually selected by West. By the end of their very first studio session together, the pair had completed the basic tracks for final version of "Gold Digger". "Gold Digger" contains an interpolation of "I Got a Woman" by Ray Charles and a bouncy beat formed from handclaps as well as scratches DJ A-Trak. The song also contains a frequent vocal sample from the song "Bumpin' Bus Stop" by Thunder and Lightning. Towards the end, the song employs vintage 1970s synthesizers which emit a honking sound in cadence to Kanye's voice. West delivers a tongue-in-cheek lyrical narrative within "Gold Digger" in which he critically depicts the disastrous life of a man married to a woman who manipulates him for financial gain. However, another story arises within the third verse, which illustrates a once destitute black male who earns a fortune and decides to leave a loyal, unselfish girlfriend for a white girl. The song's music video was directed by Hype Williams, who also directed West's previous video, "Diamonds from Sierra Leone". Shot in a widescreen letterbox format, using stylized art direction with few props, the video features performances shots of West interspersed with footage of Williams' trademark female video models depicted as "pin-up" cover models from fictional vintage magazines. The titles of the magazines the women appear on the cover of reflect the correlating verses in the song. Foxx is also present, lip-synching both his own parts and the Ray Charles vocal sample. John Legend makes a brief cameo. At the 2006 MTV Video Music Awards, "Gold Digger" received nominations for both Best Male Video and Best Hip Hop Video, but did not win either of these awards.