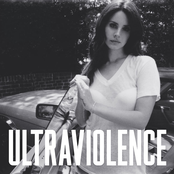 We can go back to New York
Cause loving him was really hard
We can go back to town
Heaven don't know who we are
Heaven is on earth
I will do anything for you, babe
Guess it is meant to be
Crying tears of gold, like Adam and Eve

"Ultraviolence" is the third single from Lana Del Rey's third studio album of the same name (2014). According to Brenna Ehrlich of MTV News, "Ultraviolence" tells the story of a "typical Lana Del Rey romantic relationship: broken, failed and painful". The song contains a reference of The Crystals' 1962 single "He Hit Me (It Felt Like a Kiss)" in its chorus. Kevin Rutherford of Radio.com remarked that "Ultraviolence" maintained the theme of songs previously released from the album, it "ups the lilting, low-tempo, strings-heavy form" Del Rey had established in her earlier work. Sal Cinquemani of Slant Magazine described "Ultraviolence" as a "laconic, string-laden torch song". In the line "I can hear sirens sirens, he hit me and it felt like a kiss", Del Rey references the 1962 The Crystals song "He Hit Me (and It Felt like a Kiss)" and, according to Harriet Gibson of The Guardian, "appear to romanticise brutality". A writer for the Music Times commented that the "violins, lightly thumping drums and Del Rey's angelic singing" gave the song a "church-y" feel, pointing out that the track presented her "title sound".