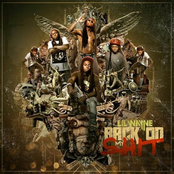 Back on My Shit

[Produced by Boi-1da and Vinylz]

[Chorus: Drake]
I'm the only one that get the job done
I don't know a nigga that could cover for me
Yeah, got some game from my dad
He said she might say she love me
She don't love me like she say she love me
Believe me, believe me
I'm that nigga, boy they love me in the streets
I'm not tryna find nobody else to beat
I'm the one they come to see because they all
Believe me

[Verse 1: Drake]
Yeah, rip, rip rip
It's been me and Young Tune off the rip
That's the man that put me in this shit
If a nigga fuck with him, I'll put him down quick
Got a verse for anybody wanna talk about the clique
I've been takin' shit light, you don't wanna hear me trip
God damn, do y'all really know who y'all fuckin' with?
Yeah, I mean you can't blame me for wonderin'
Doesn't matter, could be winter or the summer
On the road, I do One Direction numbers, I don't fuckin' miss
Yeah, Stunna and Mack know
When Wayne was gone for eight months, we put this thing up on our back
And I was snappin' off on every single track though
Collect call from the boss like where we at though
I was like, "Hah, it's our time, nigga"
He left Rikers in a Phantom, that's my nigga
And I'll been rockin' with the team 'til Carter IX
And we YMCMB, waitin' on somebody to try us, nigga
Yeah