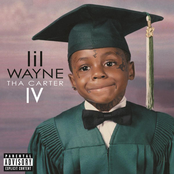 Lil' Wayne - She Will

Lil Wayne:
I tell her now gon and pop that pussy for a real nigga
I already know that life is deep but I still dig her
Niggas jealous but I could care less
I'm in hells kitchen with an apron and a hairnet
Devil on my shoulders the lord is my witness
So on my Libra scale I'm weighing sins and forgiveness
What goes around comes around like a hula hoop
Karma is a bitch but just make sure that bitch is beautiful
Life on the edge I'm dangling my feet
I tried to pay attention but attention paid me
Haters can't see me nosebleed seats
And today I went shopping and talk is still cheap
I rock to the beat of my drumset
I've been at the top for a while and I aint jumped yet
But I'm Ray Charles to the bullshit
Now jump on that dick and do a full split

Wayne:
I tell her now gon and pop that pussy for me
Haters can't see me but them bitches still looking for me
You can take that to the bank and deposit that
Put your two cents in and get a dollar back
Some people hang you out to dry like a towel rack
I'm all about "I" give the rest of the vowels back
I like my girl thick not just kinda fine
Eat her till she cry call it wine and dine
Try to check me and ima have em checkin poses
They say choose wisely that's why I was chosen
Rockin like asphalt it's the cash fault
Looked in the face of death and took it's mask off
Now I like my house big and my grass soft
I like my girl face south and her ass north
But I'm Ray Charles to the bullshit
Jump up on that dick and do a full split

"She Will" is a song by American rapper Lil Wayne, released as the fourth single from his ninth studio album, Tha Carter IV. The song features Canadian rapper Drake. It was released as a digital download and has been added to rhythmic radio stations on August 16, 2011 in the U.S. It was certified triple platinum by the Recording Industry Association of America for sales exceeding 3,000,000 copies on October 28, 2011. On August 7, 2011, a video of a recording session of the song was released with Lil Wayne previewing his verse to Drake on Skype. It was directed by DJ Scoob Doo, and was showcased on MTV News. The song was to be titled "Maybe She Will", to be recorded by Drake and to feature a verse from Rick Ross, but after hearing the song, Drake asked Lil Wayne to have it.