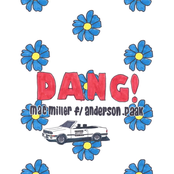 “Dang!” is the first single off Mac Miller’s album "The Divine Feminine", which was released on September 16th, 2016. The song premiered on Zane Lowe’s Beats 1 show on July 28th, 2016. Mac tells Lowe in the show that The Divine Feminine has features from Kendrick Lamar, Cee-Lo and Robert Glasper. On “Dang!”, Mac and Anderson .Paak try to get their girls back by tuning into their sensitive sides, a quality unorthodox but not uncommon in hip hop, and one both Mac and Anderson are familiar with. "Me and Anderson we were talking about doing something and to be honest he sent me that. I told him to send me some ideas and that was one of them and I was like, ‘Yo, this is it.’ I laid down the shit, sent it back and the rest is history. It actually started with a different context with him which is dope. There was a different story with him for the record and I took it and made it something new. But, dude as soon as I heard that first chord come in it was over for me." - via Beats One Radio The song features a jazzy midtempo beat from Pomo, who previously collaborated with .Paak to produce the equally jazzy “Am I Wrong.” “DANG!” was certified gold by the RIAA on March 28, 2018.