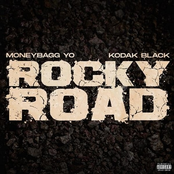 [Intro: Moneybagg Yo]
Over and that
Talk to 'em

[Verse 1: Kodak Black]
I'm lookin' at my watch and think it’s time for me to go
I been posted on this block too long, somebody gon' call the patrols
Swallowin' all this dope, think I'm on four
Tryna get to my hoe but the Perkies got me froze
Been doin' my baby momma wrong and leaving her at home
I cannot leave you on your own, we made this child together
Nina in my pocket goin' down this rocky road
Runnin' out of options, you the only one that rode
[Verse 2: Moneybagg Yo]
I'm the one that didn't' fold, all them other niggas hoes
Out there standin' by the pole, sellin' dope to buy some clothes
'Cause I knеw that attract the hoes until one lеft my heart so cold
I just didn't know no better, made me hard on the next one (Forever)
Ari want another baby but I'm too busy chasin' paper
Well, maybe, not right now, perfect timin' might come later
If that's yo' nigga, push 'bout him, shouldn't be no favor for a favor
Stand on business, leave no witness, told them members that verbatim (Word for word)

[Verse 3: Kodak Black]
Feel like we trapped, we in the trap, we on parole
How the hell we not gon' tote this strap when y'all be tryna kill us?
In the back of the Maybach, I'm tryna dodge the killers
Down here, the killers the cops, I can handle my opps

[Verse 4: Moneybagg Yo]
Don't know who killed Nuski, we just know it's a opp
Every nigga claimin' the body just want clout and some props (Stripes)
Found out where they been put up, tryna put 'em on FOX (News)
Dosed off and had a dream I paid an M for the drop (Snooze)
I been all around the world, but still, my ear to the skreets (Still there)
Put restrainin' orders on me, that ain't P, that's police (12)
Hard to get from out that water when you dive in too deep (Swim)
I been running with some gremlins, yellin', "K-T-B," glee
You might also like[Verse 5: Kodak Black & Moneybagg Yo]
I fuck with CMG, them boys like family to me
When I'm in Tennessee, ain’t even gotta call Bagg for the weed
Shit so flaky, hold on to everybody as tall as you and me
This generation so fucked up, they go off envy and greed
You for yourself, ain't bout yo' team, I already know what that be
I'm on dope and lean, sometimes I mix the slow with the speed
I self reflect and think my life as a ten
I hit the meth when we had ran out of E
Mine's just got shot, the flock came
Think in 2014, I'm in the block, chained
None of my niggas dead, they just in the feds (Free the guys)
None of my niggas died, we the ones slangin' iron (Spin and slide)

[Verse 6: Moneybagg Yo]
I'm grievin' a lil different, been on nothin' but bullshit lately (Lately)
Ain't felt no love in months, my heart been runnin' off of hatred (Fuck 'em)
In touch with higher power, prayin' Lil A beat these cases (Amen)
Ain't goin' for extortion, want sum'n from me? Come and take it (Bitch)
I'm eight hours ahead, you niggas eight figures behind
If this shit come down to it, I know lil' bruh gone shoot that iron (Shine)
Always told them what was up, can't say I left 'em in the blind (Nope)
You cap, you lyin', I'm scrapped, I'm firin' (Bah), you dyin'
Comin' down from off of six, Wockesha make me so mean
Put work in behind the scenes, tryna keep my face clean (Clean)
I been hangin' with blue hunnids 'cause these niggas too green
I tote the city on my back, it put a strain on my spleen (Hurt)
I put the city on my back, it put a strain on my spleen
Mm, I been sippin' on my sins, I'm right back drinkin' this lean
[Outro: Moneybagg Yo]
SkyDiddy
Want somethin' to feel like that? Uh, uh, mm