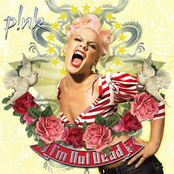 "Runaway" is a song written by P!nk & Billy Mann, produced by Billy Mann & Josh Abrahams for P!nk’s fourth studio album, "I’m Not Dead" (2006). P!nk is running away from home, hence the song title. Lyrically, the song is about P!nk imagine her life in different worlds – to be a French street singer, a prostitute in New Orleans, or a dissociative wife and mother disconnected from her past. She blames this sequence of visions on her partner, as it’s his displeasure with who she is now that makes her want to change herself.