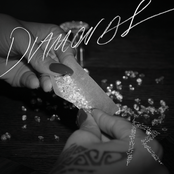 Find light in the beautiful sea
I choose to be happy
You and I, you and I
We're like diamonds in the sky

You're a shooting star I see
A vision of ecstasy
When you hold me, I'm alive
We're like diamonds in the sky

You're a shooting star I see
A vision of ecstasy
When you hold me, I'm alive
We're like diamonds in the sky

Produced by Stargate and Benny Blanco, "Diamonds" boasts soaring vocals and an undeniable hook. The Diamonds Songfacts reports the song was premiered on September 26, 2012 during Elvis Duran and the Morning Show and was made available for digital download an hour later. On the Billboard Hot 100 chart, dated December 1, 2012, released on Thanksgiving day of 2012, "Diamonds" became Rihanna's twelfth number one single on the chart, tying her with Madonna and The Supremes in fifth place for artists with the most number one hits. It also tied her for second place with Madonna for female artists with the same feat. Only Mariah Carey has more, with eighteen number ones. Rihanna also became the female artist to get twelve number one hits the fastest. “You’re not sad or dancing. You’re happy and hippie. It’s laid-back, but it’s hopeful,” Rihanna told Elvis Duran. “It gives me such a great feeling when I listen to it. The lyrics are very hopeful and positive, but it’s about love and the gears are a little different from what people would expect. I’m excited to surprise them sonically.” Aussie songwriter Sia penned the lyrics, which reference various drugs. “Palms rise to the universe/ As we, moonshine and molly/ Feel the warmth, we’ll never die/ We’re like diamonds in the sky,” sings the Bajan babe, who will launch her “Diamonds World Tour” in March.