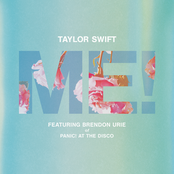 ME! (feat. Brendon Urie of Panic! at the Disco)

ME! (feat. Brendon Urie of Panic! at the Disco)

"ME!" is a song by American singer-songwriter Taylor Swift featuring Brendon Urie of Panic! at the Disco, released by Republic Records on April 26, 2019, as the lead single from her upcoming seventh studio album, titled "Lover". Various news outlets reported on April 25 that a mural of a butterfly in The Gulch neighborhood of Nashville, Tennessee, painted by street artist Kelsey Montague,was connected with Swift's upcoming music, to be released on April 26, 2019, which a countdown for appeared on her social media. A crowd of several hundred gathered at the mural as the word "ME!" was added to it by Montague. Montague told WKRN "the mural was painted for ABC, ESPN and the 2019 NFL Draft", but Swift later posted on her Instagram story that she commissioned the mural and put clues about "the song" and new music in it. She later appeared and took pictures with fans at the mural, telling them to watch ABC (and its coverage of the NFL Draft) that night for more clues. Swift later confirmed that an interview with Robin Roberts would be broadcast on ABC live from Nashville on April 25. During the interview, she confirmed the title as well as the feature from Urie and said the song and its music video would be released at midnight. The music video for "ME!" premiered on YouTube at 12AM EST (05:00 UTC) on April 26, 2019. It was directed by Dave Meyers and Swift.