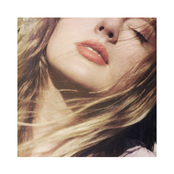 "This Love" is a song written and recorded by American singer-songwriter Taylor Swift for her fifth studio album, 1989 (2014). Swift produced the song with her long-time collaborator, Nathan Chapman. A re-recording of the song, titled "This Love (Taylor's Version)" was released on May 6, 2022 via Republic Records. It was used in a trailer for the upcoming Prime Video television series The Summer I Turned Pretty. The re-recording of "This Love" is a part of Swift's plan to re-record her back catalog, following the dispute over the ownership of the masters of her first six albums.