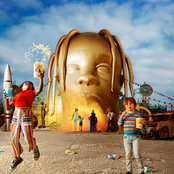 “COFFEE BEAN” is the final track on Travis Scott’s third studio album ASTROWORLD. Its lyrical content revolves around Travis' initially tumultuous relationship with his girlfriend and baby mother Kylie Jenner. He discusses the backlash and controversy that has come as a result of their relationship. Travis describes the stigma of being a 'black dude' trying to ride within a universe where he's not so easily accepted, especially given his reputation and the crowd he runs with.